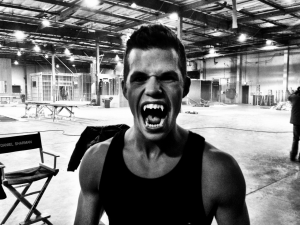 MTV has confirmed that the first half of the third season of Teen Wolf will be premiering Monday, June 3rd at 10:00. The date has been out on the internet ever since fans used social media and the Hashtagart Mosaic produced by Hyperactivate.com to unscrambled an exclusive image from the first scene of the third season premiere. That image had the premiere date on it and today, MTV made it official.

The show was previously used as a lead-out for the MTV Movie Awards, but with strong ratings last season and the ceremony being moved up two months, it will be on its own for the first time. With the first half of the season staying put in June, the second half of the expanded season will likely air sometime in early 2014 in a move akin to the ABC Family scheduling model.

Yet to be announced is a premiere date for MTV’s other scripted hit, critically acclaimed high school comedy Awkward. It’ll be having the same airing pattern as Teen Wolf, as it received an extended third season order, as well.

The third season of Teen Wolf finds Scott, Stiles, Lydia, and Allison beginning their junior year of high school. While their peers may be worried about extracurricular activities, GPA, and where they’re going to college, they’re more concerned about the alpha pack that has arrived in Beacon Hills intent on bringing Derek into their fold. Joining the cast this season are Ethan and Aiden as twin Alpha werewolves and played by Charlie and Max Carver; Gideon Emery as Deucalion, leader of the Alpha werewolves; Kali, an Alpha werewolf played by Felisha Terrell and Cora, a tough 17-year-old, who has ties to the Beacon Hills werewolf line, played by Adelaide Kane.

Gage Golightly (Erica) and Colton Haynes (Jackson) will not be returning.

Will you be watching Teen Wolf this season? How do you think the changes will impact the show? Just how dangerous is the alpha pack headed to Beacon Hills?