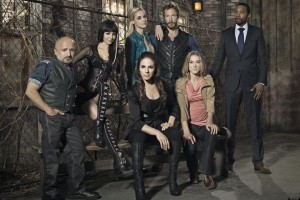 The Morrigan has been sending her minions to attack Bo, hoping to get the compromising photo the succubus took of her last season so that blackmail is no longer on the table. After the third attack in a week fails to procure the photo (or any major damage to Bo, who is healing slowly), the Morrigan looks to be out of options, at least for now; she wants to take Bo down a notch, as she feels like the succubus is getting too “big for her britches,” but she can’t use two-headed assassins, muscle-bound lunkheads, or hot dog vending jellyfish to get the job done right. No, the leader of the dark has one major player that she could use to take Bo out once and for all: Vex.

Lately, things aren’t going that well for Vex and he’s feeling a bit disgruntled. He complains about arm pain and uses it as a reason he’s not as powerful as he used to be, but upon getting a check up from Lauren, he learns that there’s nothing physically wrong with him and the problem is more psychological. When trying to talk to those at The Dal Riata about his issues, he either gets laughed at, insulted, or ignored, leading him to go to the Morrigan to pledge his loyalty to her and the dark. At the bar, he had “accidentally” ran into Bo, swiping her phone (i.e. where the only copy of picture of the Morrigan was) and gave it to the Morrigan in hopes of procuring favor; however, she would rather have Bo’s head over her phone. The Morrigan then pours both herself and Vex a drink, spiking his.

Meanwhile, Bo goes to Hale looking for protection from the Morrigan’s goons. He eventually offers a deal; if Bo manages to bring back the Staff of Righteousness from pawn broker Mortimer Fassbinder, she’d get full security detail stationed outside her home. She finds the Staff and brings it home, only to find Vex and Kenzi swapping make-up tips on the couch. Once Bo gets near Vex, something crawls out of his ear and into hers, turning her from the Bo we know to a Bo that acts like a giggly teenager, calling Tamsin a “mean girl” and promising to go talk to Dyson. Later, at the Riata, whatever crawled into Bo’s ear spreads to Dyson, who tells Tamsin that he’s going to ask Bo out on a date; after pouting about Trick not giving her the car keys and dancing on the bar to the Pussycat Dolls, Bo eventually makes it home with Dyson and Tamsin, also infected.

But not before the Morrigan sends a pig fae to Bo’s home, eventually killed once Kenzi grabs the Staff sand smacks him around with it. The problem with that is two-fold: 1) pig fae have a strong pack mentality and if one goes missing, the rest will attempt to find him and 2) the Staff formed an energy bond to Kenzi’s hand and can’t be removed. Lauren discovers that Vex has a pustule behind one of his ears, evidence that he had been used as an incubator for a parasite; later, the Morrigan explains to Vex that the parasite saps victims of a nymphoid hormone, reverting them to a mental state where they’re too young to be fae, leaving them powerless, and emitting a pheromone that attracts underfae. She makes Vex a deal: if he can finish off Bo, Dyson, and Tamsin and bring her back the Staff, he can rejoin the dark, a deal he happily takes.

The three aren’t going to be that difficult to bring down, though, as they’re busy rifling through Bo’s record collection, developing different accents, and demanding that Lauren bring them pizza. Bo and Tamsin, in particular, get closer, the latter revealing that she’s a Valkyrie and the former getting the two of them to write their deepest secrets in poem form before eating the paper on which they were written. While they’re reliving their teenage years, including a round of spin the bottle and Dyson dancing shirtless on the bed to “Hungry Like the Wolf”, Lauren develops an antidote, only the perimeter of the building was breached by three little pigs – and Vex.

Kenzi uses the staff to cover the three pigs while Lauren rushes to give Bo the antidote, though eventually, she gets surrounded by the pigs with Vex wielding an ax above her. She does manage to talk him out of killing her, giving Bo enough time to react to the antidote and take care of the pigs herself. Afterward, things are pretty blank for Bo, Dyson, and Tamsin; meanwhile, Kenzi declines the responsibilities of the Staff, which included being the ruler of the forest nymphs, and frees her hand in the process.

Hale brings the Morrigan in to admonish her for making a blatant attack on the light and potentially ruined the peace plan that he had been working on, leading him to threaten her if she did it again. Elsewhere, Vex decides to leave town out of grief over what he did, but not before he gives Kenzi a make-up brush to remember him by.

Additional thoughts and observations:
-“If I hadn’t just had my nails done, I’d rip your beating heart out myself.”
-“Listen, are you gonna teach me the double pump smudge proof technique or not?”
-“Whoa, Mack. The knife?”
-“You’re listening to Dyson take a whizz.”
-“And to think I shared my limited edition purple pixie glitter with you.”
-“I’m gonna miss that a-hole.”
-Not mentioned in the recap was the minor skirmish between Lauren and Kenzi (eventually worked out over the former punching Vex in the face and opening up about her time in Afghanistan) and Lauren trying to keep up with Bo’s sex drive, thanks to pointed words from Vex.
-Would you watch Dancing With the Fae? Because I would. I might even recap it.
-The line itself wasn’t terribly funny, but the way that Bo delivered “Dyson touched my boob!” was the biggest laugh of the episode for me.
-Next week on Lost Girl: Bo won’t allow herself to feed and taps into the world of New Age psychology, while Kenzi feels left out and vulnerable.