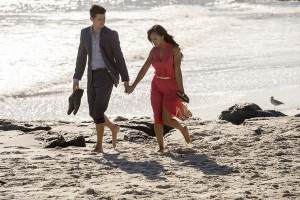 Since moving into the Bowers family home and beginning her investigation into Vivian’s death in the Deception pilot, Joanna has been dealing with increasingly complicated feelings for Julian, her former flame and a suspect in his sister’s death. The two have been rekindling old times, including a trip to the Bahamas for a conference, and Joanna has been eager to squelch the loneliness that has come with being undercover. Being in the Bowers home, constantly around the family, and thinking about how her friend was murdered by someone she knew is bound to be mentally draining and Julian provides a source of comfort that she otherwise doesn’t have. Part of her is likely working an angle to try to get information, any information, from Julian that could help her solve the case, but how much is she letting her desire to have more than a professional relationship with him cloud her judgment?

On tonight’s episode of Deception, Joanna will have to weigh the two Julians that she knows (the sweet, handsome guy she fell for all those years ago and the temperamental brat who could have committed murder) and decide which one wins out over the other. Does she trust that he’s innocent? Should she? Not helping the cause will be new information relating to the night that Vivian was murdered, likely the ring indentation on her corpse that matched a ring that Julian was wearing when the two had an argument. How will Julian react to being confronted by Joanna and possibly being accused of killing Vivian?

What do you think Joanna will find out about Julian and the night that Vivian died? How damaging will the news from Senator Haverstock be to Edward’s reputation and subsequent ambition? Will Mia’s new boyfriend have a connection to Vivian?