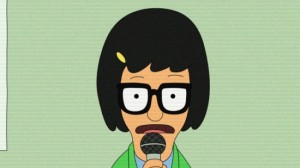 Linda finds her green blazer and loans it to Tina, who will be auditioning for her school’s news channel. To practice, Tina (with a little help from camerawoman Louise) interviews Bob and immediately begins grilling him over his culinary prowess, catching him in a lie about being able to make paella and asking him if he knew how to make anything aside from burgers. Unfortunately, the audition itself didn’t go as well; Tina herself wasn’t the problem, though. It was Tammy, her former friend turned current enemy and fellow anchor candidate, who undid Tina, intimidating her with her confidence and then advising her to talk really slowly during the audition, as she normally talks too fast.

Tammy wins the position of anchor for the WSN, while Tina is a staff intern mostly in charge of keeping everyone else supplied with juice. She runs into a potential story later that day when her janitor friend tells her about someone dragging in dog poop that was found in the hallway. However, her teacher (Mr. Grant) didn’t feel like it matched what he wanted to do with the show, preferring the likes of gossipy stories about Lenny Destefano trying to make out with the entire drill team and kids getting hit in the groin during dodgeball.

Tina decides to do some investigating on her own and attempts to try to recreate the feces with the help of Louise and one of Bob’s burgers, to no avail. They do, however, figure out that the poop had to come from inside the school, meaning that it was from a human and not an animal. When Mr. Grant rejects the latest development, Louise convinces Tina to break the WSN monopoly and form Tina News to get the story out. Tina’s report on who she’s calling The Mad Pooper goes over well with the children and puts pressure on WSN – in response, they set up a reenactment to “prove” that Tina herself was the pooper, including an edited together “confession,” getting her a trip to the principal’s office as a result.

While waiting for the principal, Tina learns of the anti-smoking assembly going on, perfect time for The Mad Pooper to strike. With Louise distracting the secretary, Tina makes a break for the auditorium and spots the pooper high above the stage on scaffolding. Taking a hydraulic scissor lift to the top of the building, she confronts the pooper, who turns out to be Zeek, WSN’s sports reporter. He tells her that it started out as an accident and eventually turned into something he was doing for her. He does one final poop that nearly hits Tammy and ultimately avoids trouble, as his family moves around a lot.

Tina ends up getting her own segment on the news cast called The Tina Table.

Like Father, Like Son
When Linda mentions how Tina and Louise are a lot like her, she also says that Gene is the spitting image of a young Bob, even breaking out a photo of Bob at Gene’s age to prove it. Gene gets freaked out at the idea of contracting male pattern baldness, growing a “push broom” mustache, and seeing his shoulders gradually begin to slump, but Louise is excited enough to begin cutting Gene’s hair and gluing it to his arms and shoulders like Bob. She even cuts a bald spot on Gene’s head, including two chunks of hair combed over to give the appearance of having a full head of hair, and gives him a mustache identical to Bob’s.

At school, Gene nearly gets a report done on him by WSN due to his reputation as a 45-year-old 4th grader, while at home,  he begins morphing into everything Bob is, standing in for him during a conversation with Teddy, bonding with Linda, and offering parental reassurance to Tina over her current predicament. He shows up at a parental conference for Tina after “being called” by the school and heads to the auditorium with the family to try to find her after finding out that she left the waiting room. Once the crowd began chanting for Zeek to poop, he can’t resist joining in and thus, returns to being a child.

Additional thoughts and observations:
-“Dad needs media coaching!”
-“I forgot that I went through a Judd Nelson phase.”
-“C’mon, Kronkite, snort! It’s for the good of the people.”
-“That kid just fathered the crap out of you.”
-“Dammit, we just got poop scooped.”
-The neighboring business from the opening credits is That’s A-Door-A-Bell Doorbells.
-There was also a Grandpa Muenster Burger with a 10% senior discount.
-Andy and Olly sighting! I loved them turning into Siamese Twins.
-Telepooptation.
-Louise’s lines about not getting enough food to be the Mad Pooper and only pooping once a week might’ve been the highlight of the episode.
-Gene’s birth is described as an “angry softball coming out of a coin purse” by Louise.
-Louise got sent to the principal’s office for hiding in a desk drawer while wearing a Hannibal Lecter mask.
-Bob’s Burgers is off next week for the Super Bowl, so in two weeks, the kids convince Bob to let them help him find a good Valentine’s gift for Linda, while Linda sets up a speed-date event at the restaurant.