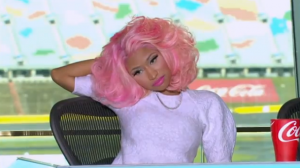 Last night the American Idol auditions headed to North Carolina, the home of many former Idol contestants (Clay Aiken and Scotty McCreery , to name a few), in the hopes of finding some talent to take back to Hollywood. What they found was, indeed, several very talented singers, even more seriously delusional contestants, and a hotbed of drama that led to the highly publicized catfight between Nicki Minaj and Mariah Carey.

In the calm before the storm, the judges were impressed by several contestants, including Brian Rittenberry, the bookkeeper from Georgia who had nearly lost his wife to cancer in 2009, and Isabel Gonzales, whose online nomination by her aunt earned her first, a visit to her high school from Randy Jackson and after her audition, a golden ticket to Hollywood.

Everything seemed to be going fairly well in North Carolina until Summer Cunningham walked into the room and auditioned with the song “Lean on Me,” to which she admitted to doing “the country thing” with it. This phrase irked Keith Urban a bit and sent him, along with Mariah and Randy, into a bit of a discussion about country music and Summer’s musical focus. After a bit of talking in circles, but also some advice about how her voice was suited for country music, the three judges voted yes to sending Summer to Hollywood. Despite their ‘yes’ votes and even encouraging comments, Nicki felt that they had tried to pigeon hole her into country and threw a bit of a temper tantrum, even storming out of the audition room when Randy reminded everyone that he was trying to offer up some advice from his 30 years of experience. (Watch the drama unfold below)

Day two of auditions in North Carolina got off to a much more positive start with Brandy Hamilton, the navy reservist with an enormous amount of charm, who, in addition to singing beautifully, asked the judges not to fight because it “makes her sad.” With that single request, the fight from the day before was seemingly forgotten and the parade of hopeful contestants continued on.

In addition to many excellent auditions, along with several not so great ones, viewers were treated to a varying number of nicknames bestowed upon the contestants from Ms. Minaj, who continued her quest to outshine the other judges and the singers, for that matter. While the random cutesy names and comments were certainly entertaining at times, it has to be said that her inexperience and youth seems to be, at times, outshining the hip hop artist herself.

Admittedly, I was a bit hard on American Idol during premiere week, even calling it a snoozefest, but after last night’s show, I am hesitantly optimistic that the judges may fall into a groove just yet, not because of the “fight” between the judges, but because at least three of the judges are starting to look like they are actually invested in finding the next American Idol. Some really amazing talent found in North Carolina didn’t hurt either.

Tonight the auditions head to Baton Rouge, Louisiana. Will the home of the Big Easy contain the next American Idol? Watch tonight at 8/7c on Fox to find out.