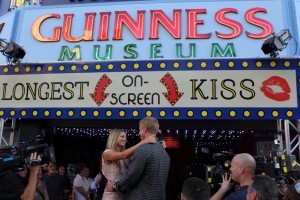 Last night on The Bachelor, Sean continued his search for a future wife, while many of the women continued their quest to get more camera time.  Admittedly, the network set Sean up with some possibly great catches, but as usual, for every potential soul mate, there has to be a little bit of crazy mixed in for good television.

The first date of the night was a one on one date with Lesley, who managed to sneak in a coy kiss the last time that she and Sean were together, a move that seemed to inspire the date choice for the evening.  After arriving at the Guinness World Record museum, a date that Lesley privately admitted was a bit lack luster, Sean pointed out to Lesley that his dad had, in fact, won a world record for driving through multiple states in the shortest amount of time.  Chris Harrison then made a “surprise” appearance and informed the couple that they would be trying to set the world record for the longest on screen kiss, which I expected would mean standing lip to lip for hours on end. It turns out that the record was only three minutes and 16 seconds, making the time to beat a bit lack luster as well.

For the week’s group date, Sean took twelve of the girls to the beach for a day of fun in the sun, as he put it. After the proper amount of frolicking and hand holding while running into the waves, Chris Harrison, yet again, crashed the date to tell the ladies that they would be competing against one another in a beach volleyball tournament to earn the chance to continue on in the date and spend more time with Sean. In the end, the blue team, which included Kacie, Amanda, Desiree, Robyn, Jackie, and Lindsay took home the win that earned them the right to stay and play.

While the red team sulkily headed home and Kristy sobbed to the others about how she wanted time (a bit of preaching to the choir, don’t you think?), the blue team reconvened with the frolicking and headed back to Sean’s place for some “serious quality time together.” After a few nice conversations with Lindsay, Desiree, and even one very fake one with Amanda, Kacie decided that she was going to “play the game” and fill Sean in on the tension between Amanda and Desiree. Unfortunately (but fortunately) for her, conniving must not be in her DNA because it just came off as bizarre and disingenuous, leaving Sean to tell her to just “be Kacie and not the crazy lady” that had shown up that night.

The third and final date for the week was another one on one with Ashlee, who was looking forward to the opportunity to fill Sean in on her past and the fact that she had been adopted as a young child. Just as she sat waiting in anticipation for his arrival, Tierra “slipped” and fell down the stairs, taking all of the attention (and camera time) away from Ashlee and Sean’s date and putting it all onto Tierra. After rejecting the paramedics’ recommendation to go to the hospital, Tierra, who was unable to answer questions coherently previously, managed to find it within herself to move to a chair away from all of the other girls to rest and once there, miraculously, she was able to crack jokes and have conversations when Sean joined her.

Once the drama from Tierra’s fall had ended, Sean and Ashlee headed to Six Flags where they had the entire amusement park to themselves.  Sean, who has expressed the importance of charity in his life, told Ashlee that two young girls from the Make a Wish Foundation who had only met via the internet through a program meant to pair up children that were struggling with similar illnesses would be joining them for the day of fun. The group seemed to have a great time together and, by the look on Sean’s face throughout the day, he was impressed by Ashlee’s interaction with the girls. At night, Ashlee shared the story of her adoption with Sean, leaving him teary eyed and rushing to give her the rose that would keep her safe for the week.

At the rose ceremony, we saw the first bit of “tough love” from The Bachelor when he pulled Kacie aside and told her that they were better off as just friends. Kacie, who obviously did not agree, agreed with him and hopped into the limo and out of sight. Also heading home last night were Kristy, the model from Wisconsin and Taryn, the health club manager from Oregon, who, let’s face it, never had a shot to begin with. Sean hadn’t given Taryn the time of day and he didn’t even give Kristy the date rose when she won the Harlequin photo shoot, but look at the bright side, ladies. In the end, Sean did you a favor, saving you from getting too attached and getting caught on camera doing an “ugly cry” limo confessional later in the game.  Now you can safely sit at home and watch all the other girls do just that.

What did you think of Sean’s choices last night? Did he make the right decision to send Kacie home? Share your thoughts below. 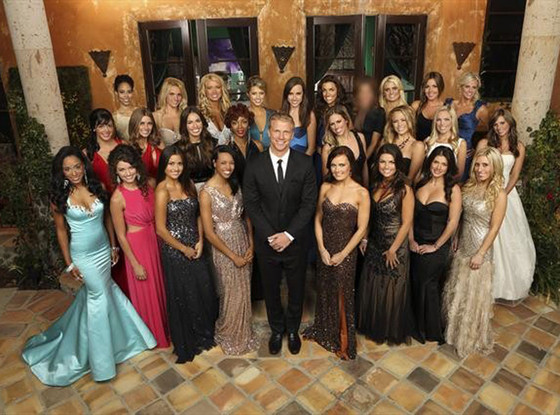