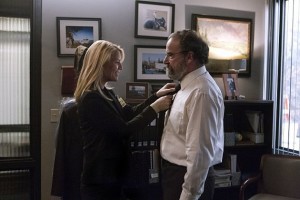 In Carrie Mathison’s mind, she finally has a shot at happiness now that the Abu Nazir threat has been eliminated. Taking out the infamous terrorist leader has “freed” Brody from the sense of obligation that he felt, particularly after the two killed Walden, and with the war hero ending things with his wife, he and Carrie can be together. For good, for real, in public. Brilliant as she may be, Carrie’s an extremely lonely soul who simultaneously relishes her career and hates herself for letting it define her as a person, so finding a kindred spirit will make her jump at the opportunity to form a real human bond away from the pressure of her job. On the season finale of Homeland, she’ll be faced with the choice that will define the rest of her life either way she leans.

In a sneak peek from the Homeland finale, Saul confronts Carrie over this very topic, as she’s waffling on what means more to her: Brody or her career. She can’t be in a relationship with a man who wore a suicide vest in a bunker with top governmental officials (and had a role in the death of the former Vice President) and be a CIA Agent at the same time, but the choice between the two isn’t coming easily, which rubs Saul the wrong way. Carrie’s afraid of being alone and turning out like Saul, though her willingness to throw away all that she worked for for a man whose allegiance is still in question says more about how vulnerable her mental state is than anything. She had seemed to put it together a little more during the second season, having gotten back on her medication and been placed under a more watchful eye; however, the amount of time she’s spent with Brody and the intimacy that they’ve achieved in the name of keeping him focused on the mission only exacerbated the yearning Carrie has for human contact.

If she chooses to be with Brody, she burns some major bridges, both professionally and personally, and may end up being under the watch of the men with whom she worked closely with for years. Brody won’t exactly slip away from the CIA radar and anyone in his life will garner their attention as well. If she chooses to stay with the CIA, she’ll have to turn on the one person who “gets” her and the one person she’s been able to open up to, keeping herself alone but doing her job in the process.

What choice will she make?

Elsewhere on Homeland, Brody meets with Faber to talk about the future of the family, Saul undertakes a secret assignment, and Quinn has an important decision to make that could send shockwaves through the agency.

The second season finale of Homeland airs Sunday at 10:00 on Showtime. The show, which has already been renewed for a third season, recently picked up a slew of award nominations, including three from the Screen Actors Guild, four from the Golden Globes, and two from the Writers Guild of America. Additionally, Homeland landed on the AFI Top 10 TV Programs list for a second consecutive year.

What do you think will happen on the season finale of Homeland? Whose body is being dumped in the episode preview? Where will the show head in its third year?