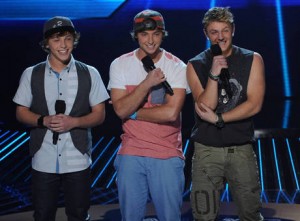 Last night on The X Factor, the four remaining contestants were given their last shots at making it into next week’s finals with a chance of taking home the $5 million dollar contract. Despite the fact that there were only four singers left in the competition, The X Factor managed to stretch the episode out to two full hours with each contestant singing two songs, the first chosen on their own and the second selected by their mentors.

Last week’s first place finisher, Tate Stevens, had another good night as he stayed true to his roots with Craig Morgan’s “Bonfire” and Clay Walker’s “Fall,” which he dedicated to his wife for their 15th anniversary. After two quality performances, Simon declared that Tate was as likely to go back to his old job as he was to fly to the moon. I think that means that Simon thinks he’s a sure thing.

Wunderkind, Carly Rose Sonenclar, who has yet to do anything but amaze, faltered a little for the first time last night when she took on two iconic song choices which made her seem, as Simon put it, “hesitant.” Last week, Carly wowed everyone with a truly unique cover of a Justin Bieber song, but this week, it seemed that risk taking was not on the agenda, as she powerhoused her way through Elton John’s “Your Song” and John Lennon’s “Imagine with less tenderness and control than she maybe should have. Hopefully, America won’t hold it against her because she really does deserve a place in the finals.

Boy band, Emblem 3 had one of their best nights, even managing to get a few words of praise from Demi Lovato. With a fairly solid performance of Peter Frampton’s “Baby I Love Your Way” and an even better performance of The Beatles’ “Hey Jude,” the trio managed to even coerce a bit of an overzealous compliment out of LA Reid when he stated they were “teen heartthrobs like The Beatles.” They were good last night, but not THAT good, LA.

Last up for the night was girl group, 5th Harmony, who were determined to prove that they could, indeed, harmonize.  With what was one of their better performances to date, the girls took on Ellie Goulding’s “Anything Could Happen” and while there were harmonies to be heard, I’m not sure if they were from the girls themselves or the backup singers hiding in the background. Their second song of the night, Shontelle’s “Impossible,” did not go over as well, largely in part due to the fact that they already sang it previously in the competition. LA deemed the repeat performance “lazy,” perhaps putting the final nail in the 5th Harmony coffin.

Tonight on The X Factor, unlike previous results shows, only one contestant will be saying goodbye to the competition. In addition, the rankings will remain a mystery as the final three head into next week’s finale.