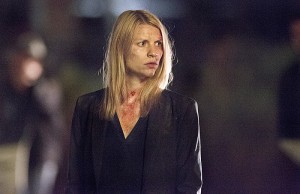 The title “In Memoriam” is really a tribute to the true title of this episode, the one we’re not allowed to say in this politically correct, free United States of America. “The Mother F*cker With A Turban.” I loved that title, and it was a little depressing to find, after the show aired, that the title became something completely different. In the land of the free and the home of the brave, our Homeland, things aren’t nearly as great as we’d like to think they are.

With the plug pulled on the jazzy title, the episode itself wasn’t all that exciting, either. Once the big bad we’ve been chasing for two years dies an inglorious death on a cement floor in a crappy warehouse, barely putting up a fight, it’s a bit of a downer. It makes you stop for a minute and wonder what it has meant.

On the surface, it would appear the game is over. Nazir killed the Vice President, avenged Issa and, while his war will go on, his part in it is over. I’m sure it wasn’t just me who wondered why he stuck around the warehouse waiting to be killed. He wasn’t a stupid man, or he wouldn’t have remained free for so long. I believe there was something else at play; something far more sinister.

The end of Nazir meant the end of the charade for Brody. He and Jessica finally had their talk, and their was barely any emotion to it. When he returned home, their love was long gone. She had moved on with Mike and he, well, he was just lost. He found himself in a crazy, bipolar CIA agent named Carrie Mathison.

If we’re to believe the previews, the next step for Brody and Carrie is to fight against the world to be together. Smokescreen.

Saul was put through the ringer by Estes for the death of their prison contact, and in the whole scheme of things, she mattered very little. It did nicely set things up to drive a hefty wedge between Estes and Saul, however. That wedge was already in place once Saul figured out Estes’ plan to use Peter Quinn to kill Brody once he was no longer necessary to lead them to Nazir. With Nazir gone, and Saul doubly angry, what does it do to the relationship between Saul and the CIA Chief?

Was Nazir really so easy to catch and kill, or was that his plan all along? To plant the seeds of distrust and doubt among the members of the US Government. To teach them to question each other, and in doing so start to unravel the entire workings of the way terrorism is dealt with by the United States? First and foremost, to go into a warring country, one that wants you dead at all costs, you have to trust your fellow soldiers. If you can’t, who can you trust?  From whom do you take your orders, and how do you know the orders are coming from the proper channels and are being given with the right intent? Truly, I cannot imagine the fallout of the breakdown of trust an operation of that size and scope. Perhaps that was Nazir’s plan.

Someone is assassinated next week. That’s a pretty lofty term to throw around. It could be Brody. He’s a congressman. THAT would be one hell of a twist, but it might be too much for the audience to handle, as Damian Lewis has become a bit of a mega star for Showtime. I’ve thought about Peter Quinn, but he’d be killed, not assassinated. What about Estes? With Saul as angry as he is and Carrie a loose cannon in the eyes of pretty much every breathing entity she knows the would be perfect foils to set up as killers of Estes.

Does Estes deserve to die? I think so. He took his role too far. He was going out on tangents without the backup of the higher ups, at least from what I could tell, and it was under his watch that VP Walden was killed. Tsk tsk tsk.

Quinn, for all his questions and eye rolling in the direction of Carrie, knows she has damn good instincts for the job. F. Murray Abraham could be called back in next season to investigate a murder of that magnitude, and he has the pedigree to join the spectacular cast and make any role his own. I could see he and Peter working together long term.

Granted, I’m theorizing based upon whims and a short preview of the season finale. We’ll know a lot more once it actually gets here, won’t we? Oh, never mind. This is Homeland we’re talking about. We’ll probably know less by the end of next week than we do now, but we’ll still enjoy the ride.