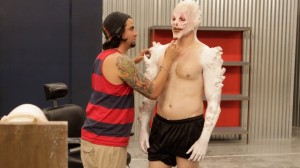 Syfy has announced a return date for popular reality-competition series Face Off. On Tuesday, January 15th at 9:00, the show will be premiering its fourth season looking for the next great makeup/special effects artist, only with one minor tweak. Acclaimed makeup artist Michael Westmore has joined the show, hosted by his daughter, as a contestant mentor. There’s no word as to his actual duties, the amount of time he’ll get per episode, or if he’ll be joining the panel as well, however.

The winner of the fourth season of Face Off will be taking home $100,000, a 2013 Fiat 5100, and the chance to become a guest lecturer at Makeup For Ever Academies in New York and Paris. Guest judges will include Bryan Singer, Gale Anne Hurd, John Landau, Michael Nankin and John Rhys-Davies, all ready to evaluate the contestants on their attempts at creating fantasy goblin kings, original comic superheroes, and two-headed giants.

Listed below are the names, ages, and hometowns of each of the 14 contestants. Information on all contenders can be found on Syfy.com.

Face Off’s fourth season, its third in the last 12 months, will be joining a packed winter 2013 line-up on Syfy, which includes the U.S. debut of Canadian import Continuum, the final series of Merlin, the premiere of Robot Combat League, and the returns of Being Human and Lost Girl, among many other slated offerings.

Will you be watching Face Off this season? What do you think about Michael Westmore joining the show as a contestant mentor? Based on the bios, photos, and videos, who is the favorite going into the competition?