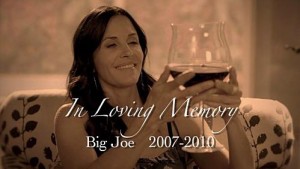 It could be argued that the only reason Cougar Town never gained (and held) a mass audience is the disconnect between the title and content.  The first six episodes fell in line with what you’d expect from that title, but once the show course corrected into an ensemble comedy, the title began to hold people back from giving the revamped show its fair shot.

So what exactly is Cougar Town about?

Cougar Town is the story of Jules, a 40-something realtor living in a cul-de-sac in Florida. After getting divorced from her husband, she decided to go all out and date younger men to try and have a little fun, but ultimately, that didn’t feel right to her. Eventually, she falls for her neighbor Grayson, a fellow divorcee (and total playboy) who previously has no trouble adjusting to single life. The two got married in the third season finale and will be having to consolidate their two houses/lives into one in the upcoming season, which will be an issue for control freak Jules and commitment-phobe Grayson.

However, while Cougar Town can be looked at as a show about second chances and the value of putting yourself out there, it’s also a show about friendship and how friends become your family. Joining Jules and Grayson in the cul-de-sac are Travis, Jules’ college-age son with ex-husband Bobby; Laurie, Jules’ best friend and the woman Travis loves (but can’t be with); Ellie, Jules’ other best friend and whose husband Andy is best friends with Bobby; Bobby, Jules’ golf pro ex-husband; Tom, Jules’ neighbor who leers around the kitchen window and desperately wants to be included in the gang; and Big Lou, Jules’ third wine glass of the series.

The fourth season of Cougar Town premieres Tuesday, January 8th at 10:00 on TBS.

Will you be watching Cougar Town this season? Are you rooting for Travis and Laurie to get together after years of flirting? How will Jules handle being married again?