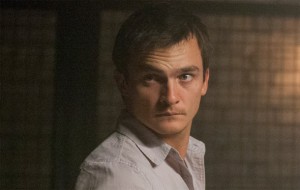 I’m a little late to the Homeland party this week because I was so sure I would come up with something profound to say about Two Hats. It turns out that just didn’t happen.

My expectations for the reuniting of Abu Nazir and Brody were higher than the return. Nazir was placing his entire terror operation on Brody. A bit full of himself, wasn’t he? I didn’t like that Brody prayed with Nazir, and I hope he’s losing some of his faith. Turning to a new faith in desperation just doesn’t ring true for me.

No matter how friendly Peter and Carrie may have seemed when he was hospitalized, he’s back to disgust with her possible motivations in the case. I can’t say I blame him, as it would be difficult to understand the attraction of a fellow CIA agent sworn to protect the country seemingly infatuated with an asset who may be the key to the biggest terror event since 9/11. Yeah, I think that would piss me off, as a coworker. As a viewer, I can’t get enough of Carrie and Brody. In some ways, that juxtaposition bothers me a bit. It makes me question my values. I don’t like it.

Brody shared pretty much everything with the CIA except the prayer session, and Roya and all of her pals were caught. The one person not caught, and the one that I still cannot believe made it into the States – Abu Nazir.

Before I expand upon that thought, a quick word about Brody’s family. It’s admirable that he cares about their well being, but they are pretty much done with him. Carrie cleverly set up Mike to be their guardians at a safe house, which led to Jessica reigniting her passion. I’m torn about that. I wish they would all just quit playing games and end the marriage. Dana, once smitten with the secrecy of her dad’s life as a Muslim and angry with her mom for giving up on him, now wishes he had never come back alive. Teenagers.

Back to the BIG STORY. At the end of the raid, when the CIA first thought Nazir was dead, Estes immediately set Peter out as a bodyguard for Brody. Yeah, I found that a little odd and had no idea what was going on. Until Quinn pulled a gun out of his coat. What the HELL? The CIA is now of two factions on the same case. Carrie and Saul thinking they are using Brody as an asset and protecting him, and Estes wanting to kill Brody the moment Nazir is dead. I get that they’re using Brody to attract Nazir, and with all of Nazir’s stateside gang in prison they will need him more than ever. But what will killing him so quickly accomplish? Perhaps the hope is to set up Nazir as killing Brody to squash the entire story and put all of their involvement with the entire thing to rest with one bullet.

In any event, it was surprising, and the last three episodes of the season featuring a fugitive Nazir and a divided CIA mission should be interesting, to say the least. How can a show carry on at this frenetic pace? Every week is a “game changer.” It’s tiring and thrilling to watch. Quite a feat.