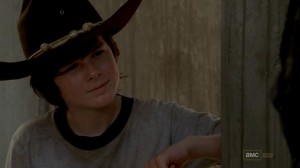 I was wondering last week if Rick thought Michonne might me dead, and I guess it was a possibility given the title of this week’s The Walking Dead, “When the Dead Come Knocking.”  Her arrival was less than pleasant, and I imagined she was ruing the minute she chose to find them when Rick told her they couldn’t let her go. I even groaned. Not again. Can you imagine a world where everywhere you went the people you met wanted to hold you hostage? What a pain in the ass!

Thankfully, our rag tag group of survivors are more refined than the good citizens of Woodbury and once Michonne was cleaned up and coherent, they listened, understood and made a tactical plan of attack to get into Woodbury to save Glenn and Maggie. I’m enjoying seeing the differences between outward and inward appearances  through Michonne’s eyes. The prison looks like a formidable place, but in the short time she was there she received medical care, kindness, and watched the tender reuniting of Carol with her friends.

Carol’s quiet understanding of the loss of Lori finally brought out the emotion we’ve been waiting for Rick to show in front of his son, and toward Carl. Together they chose a name. In Carl’s adult world, one where he needed to put a bullet in his mother’s brain to keep her from becoming the walking dead, he chose the name of his third grade teacher. From a time of peace and happiness came her name, Judith. After everyone set out on the rescue mission, Rick thanked Daryl for everything he did for Ass Kicker. Their exchange was another emotional and heartfelt moment in an episode full of little ones. Watching Michonne listen in on that conversation was more proof that she had made the right decision in going to the prison.

Did anyone else think it was completely frakkin odd that older, slightly mental fella was living in the cabin in the woods? It was completely implausible. If he had managed to live on his own out there to that point, and somehow found food, escaped walkers, and didn’t feel the need to bury his dog, surely The Governor would have found and either recruited or killed him. Most likely the latter. It doesn’t seem people off their rocker would do much for The Governor. That whole scene was a little strange, no?

Questioning The Governor’s sanity is now an issue. He really put his faith in Merle? He’s pissed that the prison group managed to stay alive and take down the entire prison of walkers was something MERLE said couldn’t be done? In what world would trusting Merle make any sense? I guess from a guy who keeps heads in fish tanks and his walking dead daughter locked away so he can brush her hair on occasion. Things become increasingly creepy with him with each passing episode. He must not have known many people to think Merle is the best choice for these

In an hour full of strange happenings, we were to believe that Milton has been experimenting on walkers all this time and never saw the transition from living to dead? That explains why he was experimenting in the first place, I suppose. Andrea didn’t have to twirl the top of any cups or play any special music to get her findings. Sadly, one second they’re with a soul and the next they are not. End of. As Andrea was assisting Milton, The Governor was busy with his own business.

The Governor’s partial insanity was in the forefront again when he let Merle interrogate Glenn about the prison and his brother. When you have no heart, it’s easy to dismiss the power one can give you. Glenn has heart and we found out just how much as he crash banged his way out of a chair he was duct taped into and killed a walker. Have you ever used duct tape? That stuff is amazing. I was thinking to myself how screwed Glenn was, and it turned out he used that tape to his advantage by using the wooden arms of the chair as little killing machines. He made better use out of his missing appendages in five minutes than Merle had in nine months. 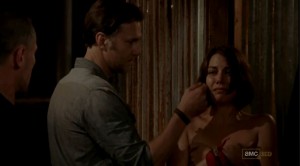 I was sickened at how The Governor tortured Maggie. The most disgusting part was when it was all over and he was caressing Andrea in the same way he had falsely attempted to calm Maggie after her lead her to believe her rape was imminent. Everything about those scenes were disgusting. Maggie’s limit wasn’t her own pain, but that of her Glenn. She gave up the information, but if there’s any justice in this whacked out world of The Walking Dead, Rick, Michonne, Daryl and friends will take Woodbury by storm before they know what’s coming. Please.