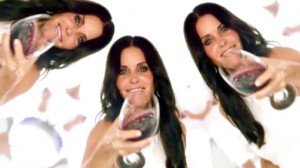 If you like clean laundry (or red wine), you may want to avert your eyes.

The latest promo for Cougar Town finds the gang doing the thing that they hate the most in the world – wasting wine. To the tune of, well, “Spill the Wine”, Jules tosses drinks at the other cast members, each of them ending up with a red-stained (formerly all-white) outfit. However, they get the last laugh by launching their drinks at Jules and soaking her dress, as well.

It’s the latest promotional ad in TBS’s push to further dispel any notion that Cougar Town is still about Courteney Cox’s character fooling around with men half her age. The network, which has already cut several commercials for the ensemble comedy that have been making the rounds on their channel, is tackling the primary issue that non-viewers seem to have with the show: the title. When Cougar Town premiered in 2009, the first 6-7 episodes were indeed about a recently divorced 40-something getting back into the dating world with younger men, but the show then changed directions and became the comedy that it is today. The problem is that the name combined with the opening episodes turned viewers off and even though a title change has been talked about for a while, nothing has come to fruition.

What we do get, though, are ads that play up the friendship of the gang, as well as the amount of wine they can put away. Fair trade-off, I think.

The 15-episode fourth season of Cougar Town premieres Tuesday, January 8th at 10:00 on TBS. There’s no word yet of when a marathon of the first three seasons will air on the network, though it should be announced shortly.

What do you think about all the Cougar Town promos that have been airing/premiering recently? Will the increased exposure and protected time slot help the show become a hit on its new network? Most importantly, would Jules ever let a drop of wine spill from Big Lou? (R.I.P. Big Carl and Big Joe)