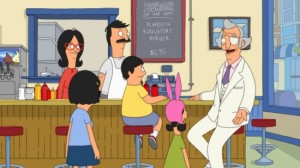 On the next episode of Bob’s Burgers, Mr. Fischoeder, fresh off of trying to romance a home-wrecking ex, is looking to bring a little excitement to the pier, but he might not have made the right decision. After coming to the restaurant to use Tina, Gene, and Louise as a focus group for his attraction ideas, Mr. Fischoeder decides to go with a mechanical shark used in a low-budget horror movie that filmed in town years ago.

While reliving memories of The Deepening 3: The 3-Deepening might bring a bout of profitable nostalgia for the area, it brings about a little danger, in that the machine could malfunction and then you’d have a giant shark on the loose. That’s just what happens during the episode, where Bob and the family are the only ones that can stop the shark, save the tourists, and keep people coming to the boardwalk. Their business lives or dies by how many people make it out to the pier, so in addition to their concern for the safety of the residents (and tourists) that came to see the shark, they want to make sure that the streets don’t go dead as a result of the “attack.” Granted, the publicity that will come from the incident will be pretty huge locally and that may drive people to see where the mechanical shark went haywire, but they’re risking bad word-of-mouth every minute the machine is out in the water wreaking havoc.

But how are the Belchers going to go about stopping a runaway mechanical shark when they can’t even get a handle on their ice cream maker?

What’s been your favorite episode thus far this season on Bob’s Burgers? How do you think the Belcher family will be able to control a mechanical shark? Would you have gone for a different attraction if you were Mr. Fischoeder?