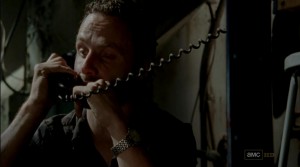 I told you the phone ringing would be a ploy. Did you listen to me? I sure hope so. I took a while to suss it out, but Rick was suffering a little break and talking to dead people. It was just the jarring he needed to get his head out of his ass and get back to his people, most notably his son and daughter. Andrew Lincoln did some fantastic work on that phone. As an actor, I’d imagine those are some of the most difficult scenes to do as all of the emotion is pulled from your own space and not those working around you.

I wish we had been spared the scenes between Andrea and The Governor. I felt more comfortable watching  innards pouring all over Michonne than I did seeing Andrea’s naked butt in bed with The Governor.  It’s pretty bad when The Walking Dead are more appealing than the living, but that dude freaks me out.

How did I miss the connection between the Woodbury hunts for people like Michonne and previously the killing of the Army team with the brutality of the staged event with the Walkers? Nothing about them is staged when they send their own people straight outside to do the same thing to living people. It means they really don’t see the difference between humans and walkers any more. Anything that isn’t with them, is  against them.

Glenn and Maggie got caught by Merle. I’m sure they’re in for a very, very rude introduction to the seedier side of Woodbury. It was interesting that The Governor wanted to know straight away whether or not Andrea knew them. What difference does it make to him? He can’t possibly want to engage them as friends for her, nor can he think she’ll be happy to see them being tortured for information. 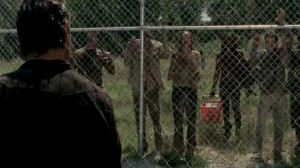 After Michonne was done slaughtering all of Merle’s buddies, she happened to see him capture Glenn and Maggie as well as them dropping the basket of baby formula. That woman has a great head on her shoulders. It was a pretty awesome moment when she showed up, formula in hand, standing among the walkers at the fence of the prison. Rick couldn’t believe his eyes, but I don’t think he was about to question his good fortune. You could see in his eyes that he knew she was something different from everyone else they’ve come across so far.

The awwww moment of the night was when Daryl recognized Carol’s knife in one of the walker’s heads while clearing out the prison. He was beside himself trying to figure out how it could have gotten there and where she could be. He finally found her and I realized they’ve become my favorite romantic hope of The Walking Dead. From the abusive bastard she was with, she found a diamond in the rough.

The season continues to wow me. What about you, are you wowed too?