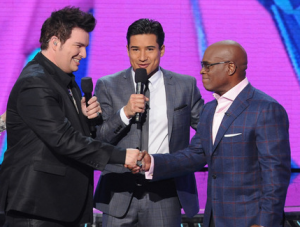 Last week on The X Factor, viewers said good bye to Jason Brock when he was eliminated by default after the judges gridlocked on a decision between him and CeCe Frey, a poor choice in my opinion.

Making the results show a bit more interesting than usual was the fact that The X Factor decided to share with the judges and all of America just how the contestants ranked amongst voters.  This proved to be a definite eye opener for, not only the singers themselves, but their coaches as well, as contestants who thought themselves to be front runners found that they were, in reality, sitting in the middle of the pack. One such act that surprised Simon Cowell, and very little seems to surprise him, was Emblem 3 with the fact that they didn’t rank high at all amongst the competition.

In an ironic twist of fate, Diamond White, who was eliminated by Britney Spears the week before only to be invited back, found herself in the top four, while Arin Ray, the boy who she lost out to, was ranked way at the bottom in 11th place.  Perhaps the biggest surprise of the night, however, was that country boy Tate Stevens led the pack, a fact that not even his coach, LA Reid, expected.

Tonight, the top 12 contestants will perform and while some will hope to hold their places in the lead, others will try to shake them up and climb the rankings ladder. One thing is for certain; however, all the contestants will be fighting to stay in the competition for a chance to be the next winner of The X Factor.