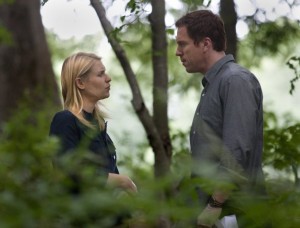 So much happened on Homeland but none of it really moved the story forward, it just pounded home the reality all of our characters are now stuck in. They are in so deep they may never get out. That feeling of utter panic and hopelessness must all-encompassing.

There as a laugh out loud scene between Saul and the Supermax warden when Saul visited Aileen, the girl he drove back from Mexico in Season One. There’s an imminent terror attack and a small man with a lot of power in a very limited space who is using that power by insulting someone he’s jealous of by way of his facial hair. The sad part of the entire situation was I really felt for Aileen, just as I did when we first met her.  She was a stupid girl who got caught up like so any Americans do, in the heat of the moment. Things are so different now, and even she doesn’t like who she has become. I’ve often wondered if I would be able to survive in a position like hers, and I guess I have my answer. I never saw it coming.

It’s almost comical watching Brody come apart at the seams. He appears to forget that his actions have placed him into the middle of this nightmare. Yes, he was brainwashed and used, but others have resisted. He didn’t. He was caught and his price is to play double agent. He’s still dealing with the effects of his absence by way of Mike Faber. Apparently Mike didn’t get the message when he was carted in front of the big guys to stop digging into Tom’s murder.

Frankly, when that conversation was taking place I didn’t know what they were trying to tell him, and I had the benefit of knowing all the pieces of intelligence. How was he supposed to know just what they were dealing with? In comes Carrie. She is so good. She was the perfect person to talk with him about Brody. “In case it wasn’t clear enough the first time, and it should have been, cease and f*cking desist. ” She was kind enough to lay the cards on the table about a terrorist event on the horizon. Why they glossed that over earlier was a grave error on the part of the men who spoke with him. Carrie rarely glosses. That’s why she’s such a bad ass.

“Two minutes with you and I feel good. How do you pull that off?” That’s what Brody said when he and Carrie met and made out in the clearing behind the benefactor’s house where the big campaign shindig was being held. I’ve said it before, they ignite the screen. Danes is such an incredible actress that we’re still not sure. Does she still have feelings for him, or doesn’t she? Is she playing him? Of course she might enjoy their trysts, but does that mean she still has feelings for him beyond the case? I have no idea and I love that mystery. She looks so conflicted when he’s around, especially when they do something like kiss, but other times, like at the precinct, there is no question she’s all business.

Jessica and Dana discovered the new world they’re in is full of deception and there isn’t a way around it. Brody finally thought he found his one way to assert himself, by taking responsibility with Dana for the hit and run accident. How he thought anyone would let him walk through that door is beyond me, but you had to admire his determination. Anybody else would have been happy to have the political machine behind them to protect their daughter, but not the Brodys. Even Nicholas Brody, proven terrorist and murderer himself, somehow felt a better man helping his daughter atone for her sins when he didn’t atone for his. The moral dilemmas alone presented on Homeland are enough to cause an aneurysm.

Another thing of note was Peter Quinn checking himself out of the hospital. He and Carrie are comrades now, not longer at odds as to whether trust is an issue. I like how easily the pieces fit together when someone takes one for the team. He’s downing a lot of painkillers, and I just pray they leave it at that. There doesn’t need to be an addiction warning on every drama on television. We get it. Some people overdo. By the way, nice ass, Quinn.