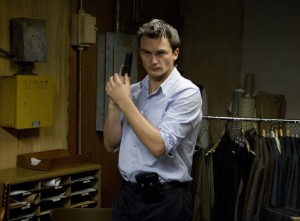 What the hell just happened? As I watched, it wasn’t surprising to me that “A Gettysburg Address” wouldn’t hold the same weight at “Q&A.” How could it? That was simply one of the best hours of television this year. But Homeland is absolutely masterful at bringing what could be an otherwise boring episode to a dramatic close. Let’s just forget about the other dramas this coming year, because they will not compare in the Emmy categories for Best Drama. End of.

The entire Brody family is gasping for air at this point. We’ll cover three of them and start with Jess. At this point, she has the best chance to make it out alive. Like a normal scorned wife, she spotted the red flag on Brody’s CIA interaction by questioning his involvement with the nut, Carrie. Brody told an old lie, that Carrie had been tossed out of the CIA after everything they had been through. Eh, it was a half truth. She was somewhat appeased. Enter her own old flame Mike Faber, charging Brody with the death of their pal, Tom Walker. All evidence points to him, and if the CIA thought taking him aside would shut him up, it did just the opposite. Jess will be really confused going forward.

Dana’s decision to take a walk on the wild side with the Vice President’s son Finn thrust her face first into her own horror film, entitled “I Know What You Did Last Night,” but without any of the fun guest stars. I really didn’t think she was stupid, but her family has been in the forefront of the news for the last year. It’s only a matter of time before someone, most likely the daughter of the deceased woman, pieces together that an important teenager was lingering anxiously at the deathbed of her mother. If Brody’s traitorous behavior and, oh, murderous ways didn’t get him kicked out of congress, this will surely do the trick.

This brings us to Nicholas Brody himself. Having no choice but to take the deal to work with the CIA and Carrie in particular, he started his new assignment by trying to identify a mystery man thought to be Hezbollah. He didn’t know who he was, but figured out pretty quickly that he might have been recruited to replace the tailor in Gettysburg who was inadvertently impaled while trying to escape Brody’s clutches weeks earlier.  Oh what tangled webs we weave!

There were some great moments regarding Carrie’s technique with Brody and how she’s getting information from him. Peter Quinn lambasted her for offering up that she’d like Brody to leave his wife, while Carrie jabbed back that it produced results that his knife through the hand routine did not. It was flinchingly obvious Carrie was using her past with Brody as a tactic when she was in the car with him, asking that he speak with his female Nazir contact, by inching her arm up his arm to his shoulder the more pressing her request became. Brody calling her on it and stepping out of the car was well played, especially because it got to him.

As Peter Quinn and some other agents rifled through the tailor’s business in search of the “something” Brody’s contact said might be found, a crew of SWAT looking men stormed the joint, shooting all, sawing into the wall and escaping with an elongated box hidden inside it. Quinn may or may not have made it out alive, depending upon how many people were there with him.

At her wits end, Carrie went to Brody’s congressional office demanding to know what he said to make it happen, even though she knew he had nothing to do with it. The thing with Carrie and Brody is they know when they are telling the truth and when they are lying. It’s part of their game and why they can work together. She knew he was a traitor and a terrorist, but she still fell in love with all of the other things Brody was, because as she has said, he is a good man. That’s what makes Homeland so compelling. To prove my point, when she broke down, instead of getting angry and pushing her and her accusations away, he used on her the same tactics she had earlier on him. He reached for her, and they touched. We may never understand their connection, but it is electric.