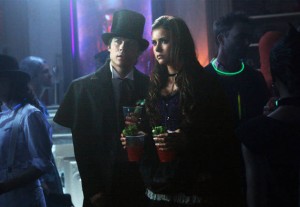 Vampire Elena is the best thing to hit Vampire Diaries since Katherine. Or badass Caroline once she realized the glories of vampirism.  As hot and dangerous as the bad boys of Mystic Falls might be, they don’t hold a candle to the girls when they let their freak flags fly.

I must be one of the few who couldn’t give two flying leaps about historical flashbacks anymore. When they were all about Damon, Katherine and Stefan, I found them fascinating, but when they dropped the entire family of originals on us in one fail swoop, I quickly lost interest. There was so much story left to be told about characters we knew so little about that I felt a bit ripped off. Don’t get me wrong, Elijah was immediately fascinating. Klaus and even Rebekah have added to the story. The complete focus on their family? Not so much.

Enter Season Four and insipid Elena turned conflicted blood sucker. I don’t even care that she chose Stefan over Damon. Her moments of humanity are slipping away. It’s been made all the easier by her inability to drink anything but fresh from the human body blood. She can’t survive on rabbits and blood bags. When she sinks her teeth into a neck, even someone she cares for deeply, she comes perilously close to draining them in delirious pleasure.

It was brilliant timing to learn Jeremy was a chosen vampire hunter just as his last blood relative became his prey. If Connor is one of the mythical Five chosen hunters, and only other hunters can see them, I suppose that means there are only three more to be discovered.  It seems the honor (curse?) is passed on when a hunter dies. Honestly, I don’t really care. Even if the mysterious growing tattoo leads to a cure, would they ever use it? Klaus wants to cure Elena to grow more hybrids. Good luck keeping the cure hidden from there. Was I the only one who was absolutely certain Klaus was going to throw his minion into the room with Connor to be killed so the tattoo would grow? If killing vamps grows the tattoo, make more vamps and kill them until you have the entire tattoo at your disposal. That would take about a day, right?

Rebekah poured her heart out to Stefan, the supposed good brother. He used her to the extent that Klaus killed her AGAIN. How many times is she going to let him kill her? That she lets him do it to her again, and again, and again is the thing that keeps her from being a favored bad girl. How bad can you be when you constantly let your defenses down with the same person? It’s borderline embarrassing.

Which brings us back to Elena. She ended up face to face with Stefan, telling him she feels like she’s losing herself. Truth is, I don’t think she cares. She comes alive when she’s vamping it up more than she ever does when she’s trying to be a normal girl. Whether that’s Nina Dobrev’s enjoyment in playing the part with wild abandon more than the sniveling, put upon lovesick high school girl remains to be seen. I’m hoping for the former.