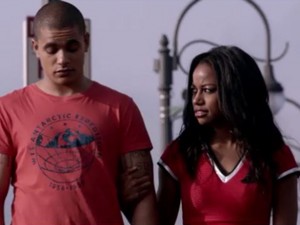 Despite what happened to end their romantic relationship, German and Ahsha were able to keep their friendship together and avoid any awkwardness at work. She knew that she didn’t want to do anything to get in the way of her ex’s dream coaching job, while he realized that trying to win her back would be fruitless, that neither of them would have been happy if they were forced to be together. Their connection, as sturdy as it might be to survive the heat from the Devils organization, has also caused Ahsha’s relationship with Derek to crumble to the point of destruction, but will she want to save her relationship at this point? Or will the cocaine incident, Derek’s overall lack of trust, and her need for stability over excitement push Ahsha back toward German?

Listed below are the dates, titles, and descriptions of the next two episodes of Hit the Floor.

Which friend do you think Kyle will betray? What type of big opportunity do you think Ahsha will be presented with? How will Derek handle the possibility of his cocaine use being found out by the team?