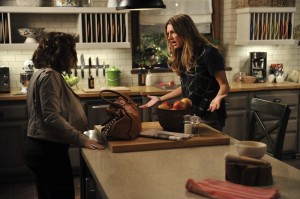 Had Karen not been recovering from the death of her lover and in a dangerous game of cat and mouse with his progeny, things with Jacob might’ve gotten off the ground sooner. He’s handsome and hard-working and the two spent quite a bit of time together building their practice, but between Karen’s tormented personal life and the damage inflicted when her license was revoked, it looked like she wasn’t meant to see whether the spark between her and Jacob was enough to form a romantic relationship. However, time has healed much of the discord between the two and at the end of the most trying time of their friendship since they got to know one another, there’s not much in the way of hard feelings. Could this mean that Karen and Jacob are ready to give things a shot?

Monday, July 7th – “What Do You Really Want”
Karen’s secret life gets the best of her when she meets a guy she likes. Joss gets shocking news from Harry that could impact both of their lives. With Daniel out of town, April has her reasons to decline a dinner invitation with the wealthy parents of her daughter’s best friend. Before Savi and Harry sign their divorce papers, she has an epiphany that challenges her future with Dom.

Monday, July 14th – “Why Do Fools Fall in Love?”
April braces herself for Daniel’s (Ricky Whittle) response when she finally confronts him to come clean. Joss finds that Scott’s (Justin Hartley) work as a plastic surgeon is testing the trust in their relationship. Dom catches Savi in a lie about her friend Zack (Jason Gerhardt) and suggests they all meet. Jacob (Matthew Del Negro) tells Karen he wants to make a go of it, but first must take care of another situation.

Do you think Karen should give things a shot with Jacob? What do you think the deal with Daniel and Jessica is? What type of epiphany will Savi have about her divorce?