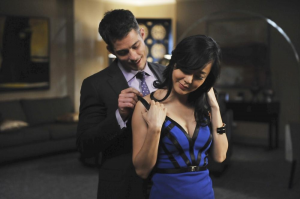 One can’t necessarily blame Karen for wanting to escape her life and become someone else, if only for a night. She’s been through a lot with Tom’s death, her affair with Sam, the shooting, and losing her practice, so she deserves an opportunity to leave her baggage at home and live life as someone whose Google notoriety isn’t costing her potential matches. But it’s one thing to treat herself to a night on the town and it’s another to become addicted to the attention she receives as these different women and on the next episode of Mistresses, Karen’s secret life has gone from fun hobby to definitive problem.

That’s because Karen has met a guy that she likes and doesn’t know how to come clean to him regarding her true identity. If she admits that she was posing as someone else and that she’s the psychiatrist who had an affair with her patient, she’ll send this man running for the hills; if she keeps the truth to herself, she zaps the fun right out of her relationship, as she’ll always have to be on her toes and keep track of the lies she tells her suitor in order to avoid being caught up in the web she’s been spinning. The point of going out was to have fun and leave any and all cares behind, so even if Karen can find a way to keep her new relationship going, will it even be worth the anxiety?

Elsewhere on Mistresses, Joss gets surprising news from Harry, while April turns down a dinner invitation with Peyton’s parents and Savi has a revelation prior to finalizing her divorce.

What will it take for Karen to pull back from her latest obsession and realize the type of position she’s putting herself in? What type of surprising news will Joss receive from Harry? Could Savi’s revelation have a negative impact on her relationship with Dom?