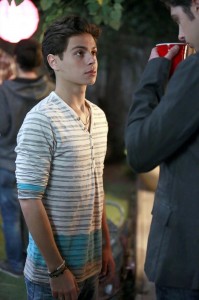 The Foster family’s closeness can sometimes be a negative thing. While they have one of the tightest family bonds around and know that they’re not alone if something bad were to happen, there’s the possibility of taking advantage of said bond and using their inter-family positions as leverage. When you’re that close to somebody, it can be hard to turn them down and send them off into the social wilderness, but in Mariana’s case, leaving Jesus to his own devices might be preferable to being caught in the middle of his latest romantic shenanigans. Could the awkward position he puts her in due to his love triangle and the unfinished business he has with Emma negatively impact their relationship as siblings?

Monday, July 7th – “Say Something”
Callie makes an important decision to address the hold-up in her adoption face on, but Jude may be more affected by her choice than he lets show. Things heat up between Callie and Wyatt, but Callie realizes she may not be emotionally ready to take the next step. Lena vies for the Principal’s job at Anchor Beach, which causes some friction in her already rocky relationship with Timothy. When the dance team holds auditions for a new member, Mariana questions why she was chosen to join the team, and she doesn’t like the answer.

Monday, July 14th – “Truth Be Told”
Callie frets about the anxiety her recent decisions have caused Jude. Emma second-guesses her breakup with Jesus, putting him in an awkward position with a new love interest and with Mariana, who becomes unwillingly involved in his dilemma. Stef struggles with her suspicions about Mike and debates moving forward with her investigation into Ana’s disappearance. When Brandon’s bandmates take him on a hike for some “special” inspiration, Brandon opens up to an unexpected confidant about his past transgressions. And Callie’s emotions get the better of her when things get hot and heavy with Wyatt.

Just how far apart will The Fosters push Jesus and Mariana before they fix their issues? Why do you think Mike was at the halfway house the night of Ana’s disappearance? Will Brandon give Wyatt plausible, helpful advice on his relationship with Callie?