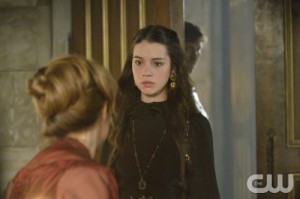 Mary has been an unusual young queen in that she’s headstrong and refuses to back down when someone like Catherine or Henry puts the pressure on her. Many in her position would have folded long before now, resigning themselves to a life of being controlled and not having the power to make the less than savory aspects of being royal worth it, but Mary has persevered, thanks to her strengthening marriage to Francis and friendships with Lola, Greer, and Kenna. Along with her loyalty to her country, her personal connections within the castle have been keeping her going this long, but what happens when she finds out about a secret clause in her martial contract that amps up the pressure on her to get pregnant? Could this be the thing that throws her off her game?

On the next episode of Reign, Mary learns that Catherine and Marie orchestrated the clause that states if no heir results from her marriage to Francis, Scotland belongs to France. During her time in France, Mary has risked quite a bit in the name of her country, so to find out that her mother was making less than advantageous deals behind her back, deals that show a lack of loyalty to the country they rule and a lack of faith in her, is especially hurtful and only adds to the pressure she’s facing. Still upset at the trickery regarding the English queen’s condition, Mary sets out to turn Scotland against her mother as a form of revenge and a way to finally embrace the power that has been at her fingertips since birth. But will she find that it’s easier to plan something of this scale than it is to execute it?

Will Mary and Francis be able to get Scotland to renounce Marie de Guise? How will Mary handle getting her first taste of real power as the Queen of Scots? Could working together to bring down Marie further bond Mary with Francis?