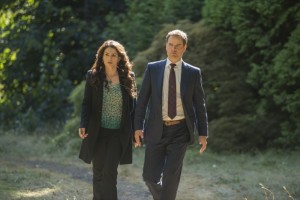 Just when Joanna thought that she had figured out who the shifter was, she learned that Vidar, an enemy from other life and someone who did wrong by her girls, was not the one who framed her for murder and that there were would be others coming in his wake. The Beauchamp women are all strong, intelligent witches who are quick learners and powerful both on their own and when their abilities combine, but in this case, they have no idea who they’re looking for or how to protect themselves from the shifter; while it would help matters if they could narrow down Joanna’s considerable list of enemies, they haven’t been able to do that, partly because the family matriarch refuses to confront her past as much as she should. For someone who is immortal, she has amassed quite a few people (and supernatural beings) who want nothing more than to see her line ended, so if there’s no progress in the coming episodes of Witches of East End, that becomes more and more a reality that she’ll have to face.

Listed below are the dates, titles, and descriptions of the next four episodes of Witches of East End.

Sunday, November 3rd – “Electric Avenue”
Ingrid finds a unique way to mourn for Adam; Joanna and Harrison take their friendship to the next level; Freya meets Dash’s former fiancée when she returns to deal with some unfinished business.

Sunday, November 10th – “Potentia Noctis”
Freya makes a startling discovery at Fair Haven; Ingrid has flashbacks to one of her past lives.

Sunday, November 17th – “Unburied”
The shifter summons a familiar face; Ingrid discovers something startling from her past; a novelist comes to East End to research his new book; Wendy tries to get serious with Leo; Joanna reads Freya’s tarot cards.

Sunday, November 24th – “Snake Eyes”
Wendy and Joanna fight over a secret that Joanna has kept for more than a hundred years; the shifter threatens Freya; Ingrid suspects that Mike has ulterior motives.

What do you think Freya discovers about Fair Haven? Will Wendy be able to get serious with Leo after what happened during their first meeting? How close will the shifter get before the Beauchamps figure out its true identity?