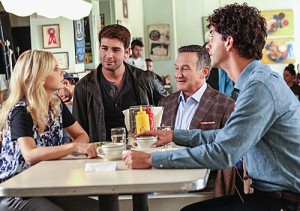 CBS has given the first comedy extensions of the season, as they’ve officially ordered full seasons of Mom, The Crazy Ones, and The Millers. None of the three are exactly surprises, especially since the network has already canceled a comedy in We Are Men.

Mom hasn’t been the breakout hit that some were forecasting, but it’s shown high retention out of 2 Broke Girls and the Big Bang Theory repeat that it aired with this past Monday, so with that key asset, as well as highly valued creative auspices, a full season was guaranteed. The Crazy Ones has become the season’s number one new comedy in viewers and the 18-49 demographic, rebounding last night from two weeks of worrying post-series premiere falls. The series is the network’s first attempt at single-cam comedy in several seasons and has garnered positive reviews for its ensemble chemistry. The Millers has also already steadied itself in the ratings, rising in the same way that The Crazy Ones did and keeping itself above a 3.0 in the 18-49 demographic, something that only two other CBS comedies can currently say.

CBS is in a transitional period in terms of their comedy slate, as How I Met Your Mother is on its way out and Two and a Half Men looks increasingly less strong. Though none of these three are huge hits (yet), they’re important pieces toward starting off the next era of CBS comedy on solid footing. The network has several other comedies yet to premiere this season, including the series adaptation of Bad Teacher and James Van Der Beek-starrer Friends with Better Lives, that could provide them with the breakout hit they’re still searching for.

Mom airs Mondays at 9:00 on CBS, with The Millers airing at 8:30 on Thursdays behind The Big Bang Theory. The Crazy Ones, meanwhile, airs Thursdays at 9:00.

Have you been watching Mom, The Crazy Ones, and/or The Millers this season? Do you think that these three will help ease the network into its next generation of comedy following the departure of How I Met Your Mother? Which of the three do you think will be the best in terms of quality by the end of the season?