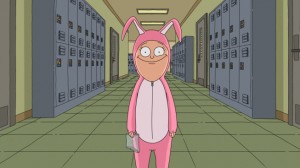 It’s Halloween and while the Belcher children are some of the only ones at school without individual Halloween costumes, they’ll be going out trick-or-treating that evening in a group costume – a Chinese dragon with two other people. Louise receives an offer from Millie, a girl in her grade, to go out together as “Dust Bunnies,” with Louise dressing as dust and Millie as a pink bunny. Exasperated, Louise wonders aloud when she would be dust in that arrangement. Bob and Linda are busy putting the finishing touches on the dragon costume by manually gluing sequins to represent the creature’s scales. Only it’s taking much longer than they anticipated and they’re forced to play a CD of Halloween sounds that Teddy bought them, though they try and get him and Mort to help with the remainder of the costume.

The dragon’s eyes are being held in the kids’ fort, where Gene spray painted them himself (before taking a nap). Louise, Tina, and Gene give Darryl, Andy, and Ollie a tour of the “two-story” abode, including Gene’s odor-filled room, Tina’s room of insecurity and horses, and Louise’s room with chalk drawings on the walls. They all managed to avoid Millie when she nearly got in and go over the plan for trick-or-treating that night; Darryl has come up with a system where the houses that give away good candy are starred on a map and the ones where the treats are pencils, apples, and/or hand sanitizer are X’ed out, meaning that they’ll be avoiding them at all costs. This is Tina’s last year as a trick-or-treater and she wants to make it count, but before she can get out to have her one last hurrah, the garbage man (dressed as Carmen Miranda) backs into the alley where the fort is and unknowingly pins the kids inside. They hear him mention on the phone that he’ll be leaving the truck there overnight, yet when the kids scream from horror, Bob and Linda think its coming from the CD that they’re still playing.

The kids panic and begin looking for weak spots in the fort; they find that they’re surrounded by truck, concrete, and metal, so their next option is Millie, who hears them yelling and walks over to the fort. However, Louise ends up insulting her and telling the girl that she doesn’t like her, causing Millie to dump the bag of dust she had and merrily tell them to enjoy Halloween in the fort before leaving. She comes back, though, and taunts them from outside about being in friend jail before releasing a horde of spiders into the fort. The kids run to the next room and Andy gets trapped by himself with the creatures; he and Ollie share a moment until Louise notices that he’s not being attacked and determines that the spiders are fake. Meanwhile, the costume alterations aren’t going so good, as Teddy spent the time allotted for 20 scales on one scale and Mort made an extra tail after Bob ended up making the actual tail for the creature. As they’re out of sequins, Bob heads to the art supply store where he has to forcibly give the owner his money and run back toward the restaurant, only for the jar to break in the middle of the street and spill sequins everywhere.

Back in the fort, the kids try to occupy themselves by having their own trick-or-treat where Tina gives out batteries and coffee filters. Just as they’re losing hope, they notice that the garbage next to the outside of the fort had softened the cardboard enough for one of them to escape and attempt to get help. Ollie gets volunteered to save the day and makes it to daylight; once there, Millie is waiting and she shuts the lid of the dumpster on his head, further trapping them in the fort. The kids turn on each other and begun searching for who was the rat that leaked to Millie their plan of escape. Louise accuses Tina who accuses Gene, only for it to be Darryl who was the mole, writing letters to Millie about how he needs candy and to use the bathroom. Louise’s plan of torturing him goes awry and the group has to deal with Millie outside the fort eating the candy that she had just gotten from trick-or-treating. The girl then overhears Bob and Linda leaving the restaurant after having to use an unpainted napkin box as the dragon’s head. She informs them that Gene, Louise, and Tina were off trick-or-treating and gets them to follow her, while Gene eats cardboard and Darryl come up with an idea to use a coat hanger to hit a nearby button on the truck that will (hopefully) lift the lid and allow them to escape.

As Bob and Linda are off using the costume they worked so hard on for their own trick-or-treating, where Bob gets recognized almost immediately, the kids attempt to execute their plan, only for Darryl to hit the wrong button and the roof of the fort to begin closing down on them. They do manage to keep it propped open by stacking paint cans and a concrete block, long enough for the door to be ripped open by the truck and allow them to escape, minus a shoe from each of Andy and Ollie. Unfortunately, trick-or-treating in their town is over, as the lights all begin flickering off when they begin planning which house they’ll go to first, greatly upsetting Darryl. While the kids return home to find their parents gorging on candy, candy that they try to get themselves, Millie finds the shoes and thinks that she inadvertently killed them. She gets spooked by the kids acting like ghosts (and hearing their voices without seeing their bodies) and leaves her candy before running away.

Additional thoughts and observations:
-“This is Tina’s room. You can really feel the insecurity.”
-“Sayonara, raisins. Old grapes aren’t candy.”
-“I felt you die.”
-“I’m not Bob Fosse!”
-“I’m handing out batteries in a box full of Gene’s farts.”
-“Butts get wet, Tina. It’s what they do.”
-“I ate a flower!”
-“China would be furious about this dragon.”
-“I can’t watch. Mostly because I can’t see.”
-“Oh my God, my last meal was cardboard.”
-“Congratulations, you’re a robot.”
-“Happy Halloween. Thanks for killing us. Heaven’s nice.”
-The business in the opening credits? Johnny Razor’s Totally Normal Candy Store. The truck? Fugetta Bat It Exterminators.
-Molly Shannon was amazing as Millie. The (horrifically creepy) laugh, the smile (pictured above), the Shining-ish way she looked into the fort, the skipping, the weird manic energy that felt vaguely “budding serial killer” – all delightfully off-kilter. Her line about sleeping in bunk beds and living in the forest? Wonderful.
-I like how Teddy bought a CD not of Halloween songs but of just shrieking.
-Bob’s been in the fort, but Linda hasn’t. I’m guessing Louise let him in?
-Funniest visual of the night: Gene’s “spray paint nap.” It was very quick, but it caught me off guard in the best way.
-Very sweet ending, with the kids crawling into the costume to get the candy. The show may seem strange and all, but I’d argue it’s the most genuinely emotional family comedy on television.
–Bob’s Burgers will be on hiatus until November 3rd due to upcoming playoff baseball coverage. Happy Halloween! 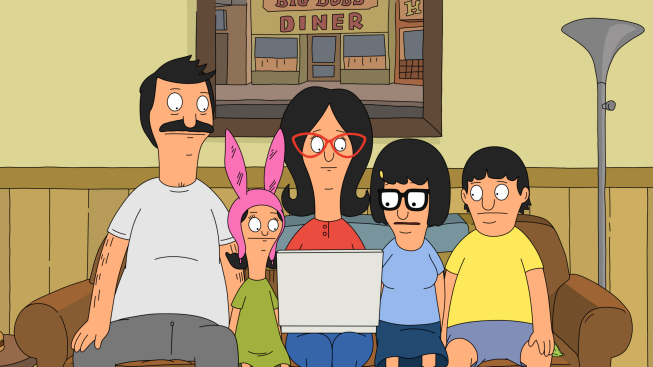