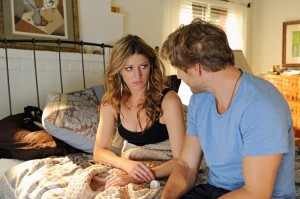 Try as she might, Savi just can’t let herself move on from her marriage to Harry. Be it guilt from cheating on him, her perfectionism forcing her to give the union another chance out of fear of failing, or empathy toward him for how the restaurant has been struggling, she’s not ready to let go of Harry just yet, even though she might be sabotaging a potential relationship with Dom in the process. But before she makes any major decisions about her life on the season finale of Mistresses, Savi has one gigantic monkey to get off her back: the paternity results. After receiving the envelope earlier this season, she’s deliberately avoided opening it and opted to live in a state of ignorance about the paternity of her unborn child, but now that the time for a decision about the next course her life will take is imminent, it’s time to know who she’ll be bringing a life into the world with.

On the season finale of Mistresses, Savi decides that it’s time for her to open the envelope. If it turns out that Harry’s the father, she might be able to use his improved mood from the influx of money at the restaurant and news of his impending fatherhood to patch up their damaged relationship enough so they can give things another chance; if Dom ends up being the child’s father, Savi’s life will have to take a dramatic turn that she didn’t prepare herself for. She might not be ready to dive into a serious relationship with her co-worker just yet, but he will have to be in her life quite a bit more (and on a more personal level) should his name be on the other side of the envelope. The only thing is – how will Savi get the envelope now that Harry’s taken it from Joss’ nightstand?

Elsewhere on Mistresses, April makes a decision about the two men in her life, while Elizabeth confronts Karen and a birthday road trip to Palm Springs brings on the unexpected for Savi.

The season finale of Mistresses airs Monday at 9:00 on ABC.

Who do you think is the father of Savi’s baby? Will April decide to take Paul back? What will happen during Karen’s confrontation with Elizabeth?