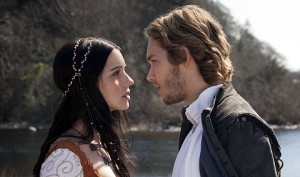 After releasing a full trailer for fantasy romance Star-Crossed, The CW has officially unveiled extended looks at Vampire Diaries spin-off The Originals, period drama Reign, post-apocalyptic survival tale The 100, and superhero drama The Tomorrow People. Previously the network had only released short previews and single clips for each of their five upcoming new series.

Airing Tuesdays at 8:00, The Originals centers on Vampire Diaries villain Klaus, who overhears that a plot is brewing against him in New Orleans. Once there, he has a reunion with his former protege and gets exposed to the tension between each of the supernatural races in the city. Wednesdays at 9:00 will see the debut of Greg Berlanti and Julie Plec’s The Tomorrow People, an adaptation of the British series of the same name. The series stars Robbie Amell as a “normal” teenager who discovers he has superpowers – and that he’s not the only one. Reign is set to air Thursdays at 9:00 and will tell the untold story of Mary Stuart, the young woman the world would come to know as Mary, Queen of Scots. When she arrives in France to fulfill her end of an arranged marriage, all in hopes of securing an alliance between Scotland and the French, she finds that her heart lies not with her betrothed but with his brother.

Meanwhile, The 100 will join Star-Crossed in premiering sometime midseason. The series, which stars the likes of Kelly Hu and Henry Ian Cusick, follows a group of 100 juvenile prisoners who are sent back to a post-nuclear Armageddon Earth to see if it’s habitable.

You can check out the previews and clips that The CW made available at upfronts here, as well as their full 2013 schedule here.

Which trailer looks the most promising? How many new CW shows will you be giving a try next season? Will The CW find another major building block in this pool of shows?