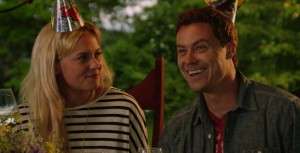 Deadline is reporting that NBC has renewed Swedish import Welcome to Sweden for a second season. Originally produced by TV4, the series, which is generating an upscale audience and has averaged a 0.8 rating in adults 18-49 and 2.9 million viewers overall in Live+same day, has already been renewed in Sweden, where it will premiere its 10-episode second season next year.

Created by and starring comedian Greg Poehler, Welcome to Sweden tells the story of Bruce, a New York accountant who moves to Sweden to be with his girlfriend Emma (Josephine Bornebusch) and experiences a culture shock when he encounters her wild family and maneuvers his way through their community. It’s the third scripted renewal that NBC has made this season, though The Night Shift and Undateable were specifically developed for NBC and thought to be primed for in-season debuts before their delay into the summer. That type of momentum could very well extend into the fall and keep NBC at number one for a second consecutive season, as the other broadcast networks have had varyingly rough summers and thus don’t have the type of promotional muscle that NBC will have for its new series.

Welcome to Sweden airs Thursdays at 9:00 on NBC. Thus far, there’s no word about the fate of Welcome to Sweden lead-out Working the Engels, an imported Canadian sitcom about a widow stepping in to help run her late husband’s law firm.

Have you been watching Welcome to Sweden? Do you think that NBC will import other comedies to join Welcome to Sweden next summer? Will NBC’s summer momentum extend into the fall and keep them at number one for another season?