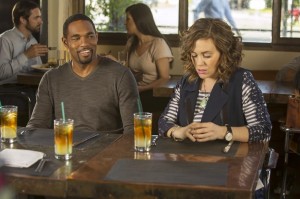 Savi’s life has been in a constant state of flux since her affair with Dom began, as she’s gotten divorced, nearly lost her life, lost a baby, nearly thrown away her new relationship for a stranger, and decided against selling her house all in the span of a year or so. It’s a lot to take for anybody and even someone as strong-willed and determined as Savi can find themselves feeling a little at sea with all the change happening around them. Which is why reaching out to her father, the man who helped define the way she viewed love and men during her adult life, seems like a fairly reasonable idea, as it will give her the peace of mind she’s currently lacking and possibly stabilize a life that’s constantly teetering on the brink.

On the next episode of Mistresses, Savi gets back into contact with her father after Joss suggests that this might be something to help point her in the right direction. Best case scenario: Savi finds some common ground with her long-absent father and comes out of the experience feeling better about their relationship, thereby possibly giving herself someone else to turn to when things get rough. However, her father had to have stayed out of her life for so long for a reason and Savi might not get the emotional closure or sage life advice that she’s looking for from their encounter; in fact, by opening up this particular emotional wound, Savi could be leaving herself vulnerable to another piece of world-changing news that might change the way she views herself and her entire family unit.

Elsewhere on Mistresses, April receives an unnerving phone call from a man shadowing her every move, while Karen struggles to get Anna to open up and Toni delivers some news to Dom.

Mistresses airs Mondays at 10:00 on ABC. Due to the season finale of The Bachelorette, Mistresses is off this week and will return August 4th.

How do you think Savi’s trip to see her father will go? Could Daniel be the one following April this closely? Is Anna’s relationship with Karen irrevocably damaged after everything that happened with Jacob?