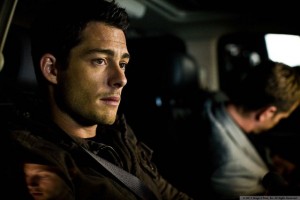 Deadline is reporting that The Client List alum Brian Hallisay will appear on the upcoming fourth season of Revenge. He’ll be heavily recurring as Ben, a easygoing local cop and new friend of Jack’s. He soon becomes wrapped up in Jack’s world and sets his eyes on Emily, a conquest that could drive a wedge between himself and his new friend.

Whether Ben is successful in wooing the elusive Emily Thorne will all depend on when he sets about pursuing her and how he approaches her. If he catches her at a particularly vulnerable time, possibly after she finds out that the father she thought was dead is lurking in the Hamptons, he might be exactly the comfort she needs, someone to focus her energy on and someone not connected to her plan in any way, shape, or form. But once Emily dries her tears and readjusts her plan to fit this latest development, which could possibly involve putting a target on her father’s back for ruining her life, there’s a high likelihood that she won’t have the time or mental space for romance, that she won’t allow herself to become as distracted as she was around the time of the blackouts.

In addition to his role on the Lifetime drama, Hallisay has appeared on the likes of Privileged, Ringer, and Body of Proof. He’s currently recurring on Mistresses as Ben Odell, a man in Karen’s (Yunjin Kim) life who complicates her feelings toward her thrilling new way of approaching dating.

Will you be watching the fourth season of Revenge? What reason do you think Ben has in getting so involved in Jack’s world? Do you think Ben is someone from Emily’s past that doesn’t know that she’s the real Amanda Clarke?