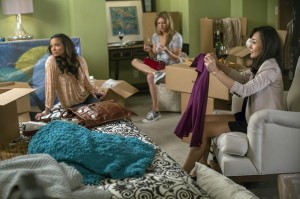 Once she found out he was married, April thought she could stay away from Daniel. Though he may be handsome and fill her with the type of creative inspiration she had been lacking for years, she couldn’t go through with something like being his mistress and still be able to look at herself in the mirror. April might have started exploring her spontaneous side while with Daniel, but she hadn’t fallen far enough to be okay with being second best, the option in his life he only chooses when he’s tired of the woman in first position. Has she?

On tonight’s episode of Mistresses, April attempts to continue her relationship with Daniel despite learning that he’s married. As much as she might want it to work and as much as she doesn’t want to lose him, she simply can’t make herself into someone she’s not; if she were younger or didn’t have Lucy, there’s a chance that she could handle being a mistress, but April is settled enough that an arrangement like this simply isn’t enough. She needs someone who only wants to be with her and while Daniel might have his positive qualities, if he’s not willing to give her commitment, he’s not fit to be in April’s life right now.

Elsewhere on Mistresses, Savi invites the girls over to say goodbye to her house, while Joss plots a way to keep Harry from going back to Australia and Karen is faced with a dilemma concerning Jacob and Anna.

Do you think April will be able to pry herself away from Daniel and keep herself from falling back into bed with him? How will Savi moving away from the house she’s been in for more than a decade impact her state of mind? Will Joss find a way to keep Harry in Los Angeles?