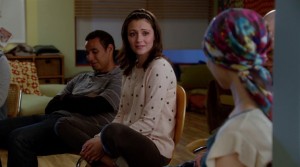 April’s entire life has been geared toward professional success. She’s toed the line perfectly with hope that her determination and ambition will get her to where she wants to go in her career. Thus far, she’s done quite well for herself, getting a dream position at a prestigious paper and working her way onto several assignments, but April still isn’t where she’d like to be, not when she can hear the clock ticking down on her time as a healthy, energetic young woman. Before she can go into chemo, April is going to want one big article to go out on.

On the next episode of Chasing Life, April gets Leo’s blessing to write a negative article about Bruce Hendrie focusing on how his past actions go against the present public image he’s crafted. It’s a risky decision, going after someone that could give her articles to write for the duration of his campaign, but it’s a decision that April had to make, lest she find herself stuck writing inconsequential articles for the rest of her life. Now more than ever, April wants to make a difference and if that means making waves with Bruce Hendrie, she’s more than okay with that.

Elsewhere on Chasing Life, George makes an effort to help Sara deal with her anxiety regarding April’s diagnosis, while Dominic gets an offer to follow Daft Punk on tour for the next four months and April sees a fertility doctor in lieu of starting her chemo treatments.

Do you think the piece on Hendrie will give April the professional respect she’s been looking for? Will Sara allow George to be there for her and finally let go of his role in Thomas’s death? If Dominic were to accept the offer to follow Daft Punk, should April still be honest with him regarding her condition?