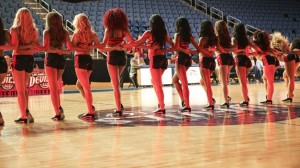 VH1 will be replaying the entire first season of Hit the Floor beginning Sunday, May 25th at 10:00 a.m. For ten hours, viewers will get thrust back into the scandalous world of the Los Angeles Devils, a professional basketball organization whose dance team draws most of the attention and media interest. The series, which became the #1 new scripted series last summer, is the network’s scripted centerpiece following the cancellation of Single Ladies and could make an even bigger leap in the ratings following a buzz-y hiatus, this marathon, and the entire first season being available on the VH1 app.

Listed below are the times, titles, and descriptions for every episode in the Hit the Floor marathon.

10:00 a.m. – “Pilot”
The lives of a professional Los Angeles basketball team’s female dance squad are charted in this drama series. In the premiere, newbie dancer Ahsha Hayes (Taylour Paige) auditions for the topflight Devil Girls against the wishes of her mother. Dean Cain and Charlotte Ross also star.

11:00 a.m. – “Game On”
The Devils’ season opens with Jelena targeting Ahsha and trying to seize control of the Devil Girls. Meanwhile, Pete and Sloane square off, and Raquel tangles with a difficult ex.

12:00 p.m. – “Out of Bounds”
Shocking news stuns Ahsha, to Jelena’s great pleasure. Meanwhile, Kyle rebels against dating rules; Raquel is encouraged to take a stand against her ex; and Derek and Terrence clash.

1:00 p.m. – “Rebound”
Pete and Sloane confront their past. Meanwhile, Jelena plots Ahsha’s failure at an annual calendar photo shoot; and Olivia snoops into the vanishing of a former Devil Girl.

2:00 p.m. – “Keep Away”
The Santa Monica Pier is the setting for a Devil Girls performance. Meanwhile, Jelena hatches a plot to create a toxic love triangle, and Ahsha tries to unearth secrets from Sloane’s past.

3:00 p.m. – “Lights Out”
Ahsha gets trapped in an elevator with Derek when the power goes out in the arena before a game. Elsewhere, Pete reveals a secret to Raquel and is once again shocked by Sloane; and Jelena faces a person from her past.

5:00 p.m. – “Fast Break”
Ahsha gets an opportunity to shine when Jelena is put on the sidelines. Elsewhere, German and Ahsha clash; Derek shares his true feelings; and Sloane discovers an alarming secret about the organization.

6:00 p.m. – “Benched”
Kyle socializes with a fan who may have hidden motives. Meanwhile, Olivia advises Ahsha in her battle against Jelena; Sloane is caught in an awkward situation; and Terrence plans a surprise.

7:00 p.m. – “Turnover” (Season One Finale)
An unforeseen personnel change shakes up the organization in the Season 1 finale. Also: Ahsha and Derek inch closer to one another; Terrence stuns Jelena with a big decision; and Pete gets romantic with Raquel.

The second season of Hit the Floor is set to premiere Monday, May 26th at 9:00 on VH1. You can check out the season two supertrailer here, as well as a recap of the first season finale here.