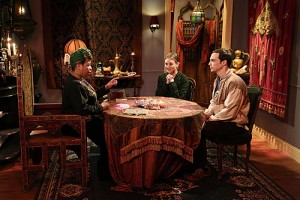 CBS has become the latest network to announce spoilers for its May sweeps programming, only in their case, they’ve just released season finale synopses and left out information about the episodes leading up to each finale. The network’s finales range from 2 Broke Girls on May 5th, where Caroline tries to help Max get her degree, to the crowning of the 28th Survivor champion on Wednesday, May 21st, with Friends with Better Lives and Bad Teacher airing into the summer.

MONDAY, MAY 5
2 BROKE GIRLS (8:00-8:30 PM)
When Caroline (Beth Behrs) discovers that Max (Kat Dennings) didn’t graduate high school, she decides to help her best friend get her degree and reconnect with her estranged mother.

WEDNESDAY, MAY 7
CSI: CRIME SCENE INVESTIGATION (10:00-11:00 PM)
The CSIs investigate a present-day crime with ties to a mob heist that occurred 25 years ago, and Brass has to make a decision when his daughter attempts suicide. Treat Williams guest stars.

THURSDAY, MAY 8
Two and a Half Men (9:01-9:31 PM)
Alan confesses his true identity to Larry (D.B. Sweeney), who continues to bless Alan’s wedding to his sister, Gretchen (Kimberly Williams-Paisley). With the wedding comes one surprise after another, including a big one from Gretchen. Country music star Brad Paisley, Williams-Paisley’s real-life husband, guest stars.

FRIDAY, MAY 9
HAWAII FIVE-0 (9:00-10:00 PM)
Evil genius Ian Wright (Nick Jonas) resurfaces and uses Grover’s (Chi McBride) daughter as bait in order to get him to steal $100 million for him. Meanwhile, Wo Fat (Mark Dacascos) escapes prison and unexpectedly returns to Oahu.

BLUE BLOODS (10:00-11:00 PM)
When Danny (Donnie Wahlberg) disobeys orders and investigates a case he was told was off-limits, he uncovers shocking information that he shares with Frank (Tom Selleck) that could have enormous repercussions within the department.

TUESDAY, MAY 13
NCIS (8:00-9:00 PM)
The NCIS team investigates whether a fire on a U.S. Navy ship, which also served as a detention site for terrorists who had been indicted, was accidental or an intentional diversion for prisoner escape. Meanwhile, Gibbs (Mark Harmon) travels home following news about his father’s passing, played by the late Ralph Waite. The episode is a tribute to both the character and the actor.

NCIS: LOS ANGELES (9:00-10:01 PM)
When the NCIS: Los Angeles team and DEA uncover the cartel’s plans to slyly transport billions of dollars’ worth of cocaine from Colombia to the U.S. using a submarine, Callen (Chris O’Donnell) and Sam (LL COOL J) must quickly locate the missing vessel. Meanwhile, Hetty (Linda Hunt) is called to Washington in the aftermath of the controversial mission in Afghanistan.

PERSON OF INTEREST (10:01-11:00 PM)
The team takes desperate action in its race to prevent the malevolent AI program Samaritan from coming online and making them its first targets. Meanwhile, the months-long battle with the anti-surveillance terrorist group Vigilance comes to a shocking conclusion.

WEDNESDAY, MAY 14
CRIMINAL MINDS (9:00-10:00 PM)
As a team member clings to life, the BAU continues its investigation in Texas where they uncover a deep web of corruption, and Garcia is thrust into action to save a friend. Esai Morales returns.

THURSDAY, MAY 15
THE BIG BANG THEORY (8:00-8:31 PM)
With his entire world changing around him, Sheldon (Jim Parsons) considers a major move.

THE MILLERS (8:31-9:01 PM)
Carol (Margo Martindale) has the worst Mother’s Day ever when Nathan (Will Arnett) forgets to get her a present.

ELEMENTARY (10:01-11:00 PM)
Rising tension between Sherlock (Jonny Lee Miller) and Joan (Lucy Liu) brings their partnership to a crossroads, but they endeavor to put their differences aside while they help Sherlock’s brother, Mycroft (guest star Rhys Ifans), who faces accusations of treason and murder.

SUNDAY, MAY 18
THE AMAZING RACE (8:00-9:00 PM)
With the one million dollar prize on the line, the final teams race through Las Vegas, where the world’s greatest illusionist, David Copperfield, designs a final challenge that requires the remaining teams to master the art of magic.

THE GOOD WIFE (9:00-10:00 PM)
The futures of Florrick/Agos and Lockhart/Gardner are at stake when the firms consider merging, driving a wedge between Alicia (Julianna Margulies) and Cary (Matt Czuchry). Meanwhile, Diane (Christine Baranski) makes a big decision when Louis Canning (guest star Michael J. Fox) challenges her role at her firm.

THE MENTALIST (10:00-11:00 PM)
A new lead in a cold case requires Lisbon (Robin Tunney) to delay her plans to leave for Washington, D.C., giving Jane (Simon Baker) time to finally come to terms with his feelings for her and decide on a course of action.

MONDAY, MAY 19
MIKE & MOLLY (9:00-9:30 PM)
Molly’s thrilled when she is accepted into an elite eight-week writer’s workshop in Iowa, but when Mike asks her not to go and leave him for the entire summer, Molly questions whether or not to pass up her opportunity of a lifetime.

WEDNESDAY, MAY 21
SURVIVOR (8:00-10:00 PM)
Four Castaways remain and one will be crowned the Sole Survivor during the two-hour season finale, followed by the Live Reunion Show (10:00-11:00 PM), hosted by Emmy Award-winning host Jeff Probst.