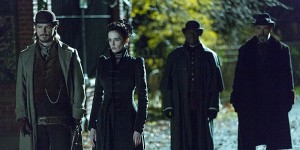 Showtime has made the full Penny Dreadful series premiere available on their Youtube channel two weeks before the show’s television debut.

From John Logan (Gladiator) and executive produced by Sam Mendes (American Beauty) and Pippa Harris (Revolutionary Road), Penny Dreadful takes place in Victorian London and brings together several key figures from gothic literature to explore the concept of alienation and the question of what it means to be a monster. The series, whose first two episodes will be directed by Juan Antonio Bayona (The Impossible), is said to focus on three characters: Ethan Chandler (Josh Hartnett), an American marksman who encounters the seedier side of London; Vanessa Ives (Eva Green), an enigmatic heroine with a strong connection to other worlds; and Sir Malcolm (Timothy Dalton), an African explorer drawn to London while searching for his missing daughter.

In addition to Hartnett, Green, and Dalton, Penny Dreadful stars Billie Piper (Secret Diary of a Call Girl) as Irish immigrant Brona Croft, a woman desperate to escape her troubled past; Reeve Carney (Spider-Man: Turn Off the Dark) as Dorian Gray, a confident yet mesmerizing beauty; Simon Russell Beale (The Deep Blue Sea) as eccentric Egyptologist Ferdinand Lyle; Harry Treadway (Truckers) as Dr. Victor Frankenstein; and Rory Kinnear (Skyfall) as Frankenstein’s monster. Penny Dreadful will be the second series premiere Showtime has had this year following the introduction of global warming documentary Years of Living Dangerously; the network still has one new series to premiere this year in The Affair, a drama about the impact an affair has on two marriages that stars the likes of Dominic West and Ruth Wilson.

The series premiere of Penny Dreadful is set to air Sunday, May 11th at 10:00 on Showtime.

Will you be watching Penny Dreadful? What did you think about the show’s first episode? Where could a show like this go over the course of eight episodes?