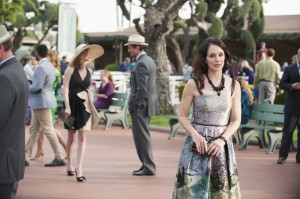 Emily Thorne’s plan for vengeance has been derailed for much of the third season of Revenge, as she’s had to deal with crippling blackouts and dwindling senses of confidence and purpose. Once living her life with blinders on, seeing nothing but her next move to bring down the Graysons, Emily has felt the weight of her plan this season and realized just how much she’s taken on by dedicating her life to pursuing revenge. Years ago, she thought that the closer she got to destroying the Graysons, the more invigorated and alive she would feel, but it turns out that her thirst for vengeance has only lessened the deeper she’s gone into the Hamptons rabbit hole.

On tonight’s episode of Revenge, Emily has one of her first real leads of the season in Oscar Chapman, the reporter with a connection to Aiden’s father Trevor who could sketch out Trevor’s relationship with Pascal. It might just be a dead end if Pascal had no part in David Clarke being railroaded, but it’s something that could reinvigorate Emily’s motivation to see her plan through. Even if she doesn’t find Oscar Chapman or if Oscar Chapman confirms that Pascal is an innocent in all this, getting back in the game could do wonders for Emily, showing her that she’s within reach of the goal she’s dedicated her life to and that soon, normalcy may be something more than a pipe dream. However, if Pascal does happen to have a role in the imprisonment of David Clarke, how will Emily ultimately make him pay?

What do you think Emily will find out about Oscar Chapman faking his death? Is Emily becoming reckless with how she’s letting Victoria operate right under her nose? Will Emily’s plan get back on track after being derailed for much of season three?