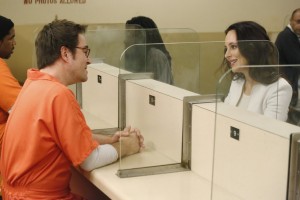 Victoria Grayson is someone who gets what she wants. She might have had numerous stumbling blocks in her life, events that guided her down the path she ultimately regretted taking, but when she wants something, when she passionately believes in something, she reaches out and takes it. As much as she may despise Conrad for everything he did to her during their marriage, she learned how to be a shark from him and it’s served her well, as she’s gotten to the top of the Hamptons social scene by being cunning, ruthless, and, most of all, smart. So the fact that she’s latched on to the mission of exposing the real Emily Thorne, the skeletons that her former future daughter-in-law keeps buried in her closet, is not a good thing for Emily.

On tonight’s episode of Revenge, Victoria pays Mason Treadwell a prison visit and gets even closer to figuring out that the woman she knows as Emily Thorne isn’t who she claims to be. All of this resulted from Emily’s plan being thrown off due to the blackouts and regrouping has taken longer than one would expect from the woman who came to the Hamptons on a warpath toward justice; once Emily realizes that Victoria is going after her, she’s got to find a way to balance her original plan for revenge against the Graysons with her new plan to stall/misdirect the Grayson matriarch, therefore giving herself the time and space needed to get back on track. But has Victoria gotten too close to the truth about Emily to be turned around now? Are Emily Thorne’s days in the Hamptons numbered?

Elsewhere on Revenge, Emily and Aiden unearth key LeMarchal family secrets while looking into Pascal’s past.

What do you think Victoria will find out from Mason Treadwell? Are we heading toward Victoria exposing the truth behind Emily Thorne in the season three finale? How will the secrets Emily and Aiden uncover help them figure out Pascal’s connection to Aiden’s father?