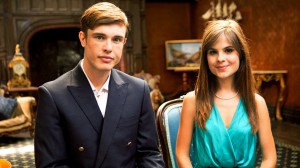 BBC America has announced that it’s ordered its first original comedy series in Almost Royal. Executive produced by Clive Tulloh (The Dame Edna Treatment) and Seamus Murphy-Mitchell (Bugs), the seven-episode first season follows Georgie (Ed Gamble) and Poppy Carlton (Amy Hoggart), two spoiled young British aristocrats who have agreed to allow a camera crew to follow them on an unofficial tour of the United States. While affable Georgie is using the trip as a way to become more manly and live up to his father’s legacy, deluded and untalented Poppy is looking to use the exposure to become the next big pop star/actress/author/lifestyle guru.

While BBC America has imported several British comedies in the past, including the likes of The Thick of It and Absolutely Fabulous, it remains to be seen whether an original comedy of their own can break out and find a foothold in a drama-heavy lineup. Particularly interesting is that Almost Royal will have that sort of docu-comedy feel that might help it better fit on the network, despite the fact that the format is on its last legs on American television with the conclusion of The Office and The Michael J. Fox Show and Modern Family and Parks and Recreation aging. In addition to critically acclaimed Orphan Black, the network is currently home to Doctor Who, In the Flesh, and Ripper Street, though the latter was cancelled following its second season and will return for a third through Amazon Prime.

Gamble has appeared on an episode of Man Down and written for Never Mind the Buzzcocks; Hoggart’s television credits include Crackanory and Laughter Shock.

The series premiere of Almost Royal is set to air Saturday, June 21st at 10:00, where it will follow the second season finale of Orphan Black.

Will you be watching Almost Royal? What are you expecting from the first season? Do you think comedy can work on BBC America?