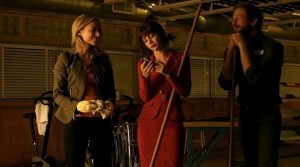 To live in the Fae world, one has to be prepared for any and all situations to arise. You never know what type of creature you’ll be interacting with or whether your safety is guaranteed on a day-to-day basis, but that’s the price the Fae pay in order to do things their way and live (mostly) without the threat of human detection or being smothered by rules that confine them to an extreme degree. However, while the gang might be ready for any type of fight to arise and openminded to the seemingly unending array of Fae that they’ve encountered recently, they hadn’t exactly prepared themselves for Bo proclaiming Rayner to be her soul mate, not after she spent the entirety of her time since returning from the train viewing him as her enemy.

On the next episode of Lost Girl, the gang deals with the fallout of Bo’s decision while out on a mysterious undercover mission. They know that Bo has a certain way of doing things and that she needs the space to be able to figure herself out, especially after her experience on the train and the revelation that she was Dark, but there’s no way they would allow her to run off with Rayner, seemingly on a dime. Aside from the fact that monogamy isn’t exactly Bo’s strong suit, something that the gang accepts and loves about her, they know nothing about this Rayner – what he’s capable of, whether he manipulated Bo into thinking they were soul mates, why he drew her to him in the first place. All they have right now is what Bo says to them and given how lovestruck she sounded when she returned from her second trip to the train, perhaps her word on the subject is not the most valid or impartial.

Elsewhere on Lost Girl, Bo retraces steps that may lead to her destiny and goes up against the Una Mens alongside Rayner.

Why do you think Dyson is so concerned about mermaids being involved in the gang’s mission? Is Bo’s true destiny to be with Rainer or has he manipulated her to believe that? What will Bo find when she retraces her steps after her recent epiphany?