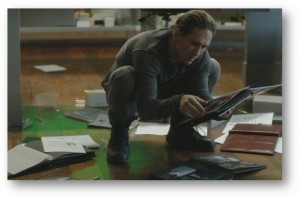 Constance’s death may have ultimately been beneficial to the CDC and all those still alive in Arctic Biosystems, but it was only a matter of time before her disappearance would catch the eye of the other Ilaria executives and prompt a search of the base. And this time, the corporation wouldn’t be sending another warning shot like Constance, whose presence was less threatening than Hatake and the CDC imagined it to be; instead, Ilaria would send in the big guns with instructions to leave as many dead as they could and to do whatever necessary to find and capture the NARVIK samples and the subsequent cure.

On the next episode of Helix, Hatake learns that Ilaria will be sending mercenaries to the base in the next six hours, meaning that the CDC will have to formulate a cure while under a massive time crunch and prepare to either escape the base or use Arctic Biosystems as a way of fighting back against those who seek to do them harm. But all hope isn’t lost, as Hatake plants explosives throughout the base, all likely timed to go off when the Ilaria goons come inside the base, and Alan and Julia are seeing progress with Sarah’s tumor after injecting her with a sample from Julia. All that matters now is that they see work quickly enough to get the cure, which could be helped if they see enough progress in Sarah, and come up with a plan on how they’ll leave the base and what they’ll do when they’re free from the Arctic. Ilaria won’t exactly let them escape without repercussion, so even if Alan and Julia make it to the outside world again, they’ll have to deal with the corporation for a long time.

Elsewhere on Helix, Peter leads the vectors in one last ditch effort to spread the virus.

Will the CDC have to stare down Ilaria mercenaries or will they be able to escape the base beforehand? Could Hatake be setting a trap for Ilaria with the explosives he’s planting in the base? Are Alan and Julia going to be able to find a cure and help the remaining vectors?