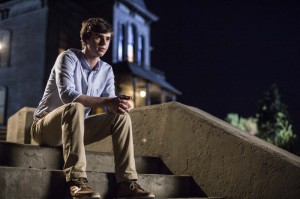 According to The Hollywood Reporter, A&E has opted to remove crime drama Those Who Kill from its schedule and push Bates Motel back to the 10:00 slot it occupied last season. The network is said to have faith in Those Who Kill and will determine a time slot for a relaunch of the series, which stars Chloe Sevigny and James D’Arcy, sometime in the near future.

It’s rare to see a highly promoted cable drama be yanked from the schedule, especially this early in its run, but it’s better in the long run for Those Who Kill that A&E pulled it when it did. Had the network allowed the show to languish with low ratings, there might not have been a chance for it to build an audience and it would have ended up canceled following its season finale in May. While giving it a relaunch doesn’t guarantee an upturn in the ratings, it’s clear that airing at 10:00 in an increasingly crowded Monday is too much for the young show and that it might be better served by airing either a different time of year or different night of the week.

Based on Danish series Den som draeber, Those Who Kill follows Catherine Jenkins (Sevigny), a recently promoted homicide detective who enlists the help of a forensic psychologist (D’Arcy) to track down serial killers and get closer to answers about the murder of her brother. In addition to Sevigny and D’Arcy, Those Who Kill stars James Morrison (Hawthorne), Omid Abtahi (Last Resort), Anne Dudek (Covert Affairs), Kerry O’Malley (Shameless), and Bruce Davison (Close to Home).

Do you think A&E made the right decision to pull Those Who Kill? Where should they relaunch the show – summer or another night during the spring? Will the show be able to find an audience wherever the network opts to place it?