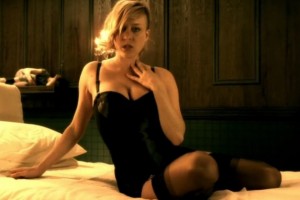 A&E has announced that Those Who Kill, its next original scripted drama, is set to premiere Monday, March 3rd at 10:00.

“Glen Morgan and the incredible team behind the Those Who Kill have crafted a captivating drama that we’re thrilled to add to our slate of original scripted series,” said David McKillop, Executive Vice President and General Manager of A&E Network. “As the story unfolds, these damaged yet good-intentioned characters are brought to life by the talented cast.”

Based on the format of a Danish crime drama that was inspired by a series of Elsebeth Eglholm novels, Those Who Kill stars Chloe Sevigny as Catherine Jensen, a recently promoted homicide detective who, motivated by the disappearance of her brother, tracks down serial killers. To help get insight into her cases, she enlists the help of forensic psychologist Thomas Schaeffer (James D’Arcy), as she suspects that her stepfather might be a serial killer and has gotten too close to cases in the past to where she knows she needs a third party. However, Schaeffer too finds himself deeply connected to the cases that he works, only through the killer rather than the victim.

In addition to Sevigny and D’Arcy, Those Who Kill stars Bahar Soomekh (Saw III), James Morrison (24), Kerry O’Malley (Case 39), and Omid Abtahi (Argo). The X Files‘ Glenn Morgan wrote the pilot episode and will serve as both executive producer and showrunner for the 10-episode first season. The series joins a scripted lineup that includes the likes of Bates Motel, which is heading into its second season this year.

Will you be watching Those Who Kill? If you’ve read the Eglholm novels, do you think the television series can adequately depict Catherine and Thomas’ relationship? Who would you like to see stop by the show for a one-episode guest stint or a longer arc?