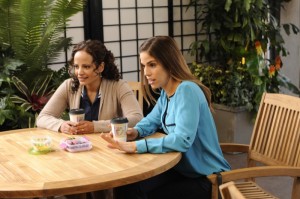 Lifetime has revealed that the second season of breakout soap Devious Maids is set to debut Sunday, April 20th at 10:00, less than a year following its series premiere. The second season premiere, whose title hasn’t been released as of yet, will be directed by series executive producer Eva Longoria in her television directorial debut; she previously directed shorts Out of the Blue and Proper Send-Off, as well as 2010 documentary Latinos Living the American Dream.

When the show returns for its second season, Beverly Hills has been hit by a wave of criminal activity that’s left the maids feeling uneasy and the residents in a vulnerable situation. While Marisol has started up a new romance with a man whose secrets begin coming forth the more she digs into his past, Zoila’s relationship with Valentina has soured to the point where the latter is working for a new employer, Rosie’s immigration status is still in flux, and Carmen gets to be in the spotlight thanks to her faux engagement to Alejandro, though it’s not exactly the view of fame that she anticipated in having.

Joining the cast of Devious Maids this season will be Dominic Adams (Romancing the Joan), Joanna Adler (Orange Is the New Black), Colin Woodell (Criminal Minds), and Mark Deklin (GCB), the latter of whom will play Nicholas, a handsome, wealthy philanthropist whose first wife died under mysterious circumstances, per Deadline.

Last season, Devious Maids nearly doubled its ratings from its modest series premiere to its season finale, becoming the network’s fastest growing drama ever and significantly helping Lifetime with Hispanic audiences. You can check out a recap of the first season finale, which solved the mystery of who killed Flora Hernandez (and why), here.

Do you like that Lifetime is bringing back Devious Maids as early as they are? Can the show continue its ratings momentum during season two? Should the network be using the show to launch a new series, considering that former Lifetime spring occupants Army Wives and The Client List were cancelled last year?