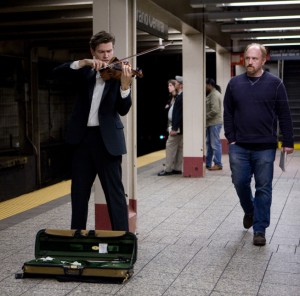 FX has announced that the fourth season of critically acclaimed comedy Louie will premiere Monday, May 5th at 10:00, with the 14-episode season set to air in seven hour-long blocs.

“Louis said he needed extra time between seasons three and four of his show because – even though Louie was the most critically acclaimed television comedy series in America – he needed to make it even better,” said John Landgraf, CEO, FX Networks and FX Productions. “Based on the first three episodes we’ve seen, remarkably, he accomplished his goal.”

The Emmy-winning series is coming off a 19-month hiatus that nearly kept it from being eligible from next year’s awards, though the network has fought against that by airing two episodes a week so that over half the season will have aired by the May 31st deadline. An additional bonus of airing two episodes of Louie together is that FX is light on comedies at the moment and wouldn’t have had anything to air along with it, thanks to Wilfred, the show that Louie aired with for its second and third seasons, being moved to FXX for its fourth and final season.

Though Louie has attracted quite a bit of critical and awards attention, the show has never been a ratings magnet and rather than leaving it stranded on a night that has already nicked Archer and caused Chozen some ratings difficulties, FX is opting to make the best of a new situation and stir up a shorter, more concentrated buzz for their comedy crown jewel. With Louie being the only comedy airing on FX this spring, there was a chance it could have reverted back to its status in season one as a post-drama 11:00 show, but since it’s earned a certain notoriety in the proceeding seasons, the network likely decided that it’s too big a show to tuck behind one of their dramas.

Will you be watching Louie this season? Do you think the move to Mondays will ultimately be a good thing? What type of episodes are you expecting from Louie after the hiatus?