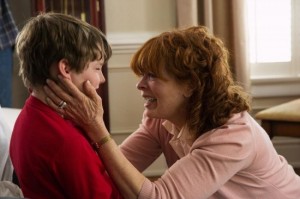 ABC has announced that the pilot episode of Resurrection will be airing Saturday, March 15th at 8:00, where it’s scheduled to replace a Castle encore. The series debuted this past Sunday to a mighty 3.8 in the 18-49 demo, easily making it the network’s number one drama of the week and reinvigorating a Sunday lineup that had been fairly dormant for the past season and a half.

The network hopes that by reairing the pilot, they can get the show sampled even more than it already was and stave off the drop that comes with every new show’s second episode. If ABC is able to keep Resurrection at an acceptable ratings level through its eight-episode first season, there’s a chance that the show could be brought back this fall for a 22-episode second season, likely with Once Upon a Time and Revenge on either side. It’d allow ABC to focus its attention on other nights and strengthen its drama roster, but is the concept, outlined below in the pilot description, flexible enough to handle the strain of a 22-episode season?

“The Returned”
An 8-year-old American boy (Landon Gimenez) wakes up alone in a rice paddy in a rural Chinese province with no idea how he got there. Details start to emerge when the boy, who calls himself Jacob, recalls that his hometown is Arcadia, and an Immigration agent, J. Martin Bellamy (Omar Epps), takes him there. The home he claims as his own is occupied by a 60-year-old couple, Henry (Kurtwood Smith) and Lucille Langston (Frances Fisher), who lost their son, Jacob, more than 30 years ago.

Resurrection airs Sundays at 9:00 on ABC. You can check out a preview of the second episode below.

Will you be watching the Resurrection rebroadcast? Do you think that the show will pick up any new viewers with the additional airing? If the show continues to be successful, should ABC opt to order a full 22-episode second season?