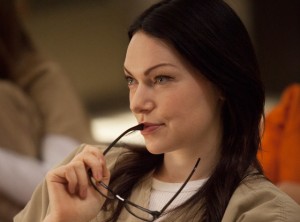 The 18th Satellite Awards were handed out Saturday and on the television side, the biggest storyline was the rise of non-traditional television outlets, as Netflix and Amazon accounted for five major wins, including a surprise victory for Orange Is the New Black‘s Laura Prepon in the Supporting Actress, Comedy category. Black was the only non-Breaking Bad series to pick up multiple awards this year from the International Press Academy, as both the Netflix prison dramedy and the AMC crime drama earned three victories apiece, each taking home two acting trophies to go along with a series win. The continued positive reception that Black has had thus far this awards season is a sign that the television industry is open to recognizing more than just House of Cards out of Netflix’s recent play for scripted prominence, provided Black submits in the comedy categories like it has been doing vs. going for drama recognition like it did at the Golden Globes.

Other winners this year at the Satellite Awards included Dancing on the Edge, giving Behind the Candelabra a rare loss; Michael Douglas, picking up yet another statue for his portrayal of Liberace; Game of Thrones, earning recognition among a fleet of genre series; and Elisabeth Moss for her acclaimed turn in Sundance miniseries Top of the Lake. A full list of winners can be found below.

What do you think about the winners this year at the Satellites? Do you think there were any egregious upsets? Which victory was the happiest surprise?