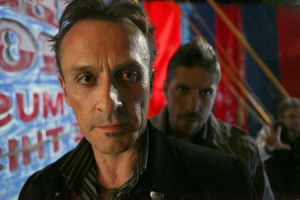 During its Olympic coverage on Saturday, NBC revealed that superhuman drama Heroes will be returning for a 13-episode event miniseries titled Heroes Reborn. To debut sometime during the 2015 season, stand-alone Reborn will be helmed by original series creator Tim Kring, with all details pertaining to characters and storylines being kept under wraps for the time being. The miniseries will be preceded by a web series designed to introduce audiences to the characters and new storylines.

“The enormous impact Heroes had on the television landscape when it first launched in 2006 was eye-opening,” said NBC Entertainment President Jennifer Salke. “Shows with that kind of resonance don’t come around often and we thought it was time for another installment. We’re thrilled that visionary creator Tim Kring was as excited about jumping back into this show as we were and we look forward to all the new textures and layers Tim plans to add to his original concept. Until we get closer to air in 2015, the show will be appropriately shrouded in secrecy, but we won’t rule out the possibility of some of the show’s original cast members popping back in.”

It’s definitely a surprise move to see this be the property that NBC tries to bring back in some form, considering that the positive reception that the show premiered to and built up during the course of its first season evaporated long before its fourth and final season concluded in 2010. However, the show’s time on Netflix has likely introduced it to a whole new audience that didn’t watch during its time on NBC and with event/miniseries all the rage in the world of television and the story reportedly being close-ended, there’s a chance to capture a pretty decent audience.

You can check out the first teaser for Heroes Reborn below.

Will you be watching Heroes Reborn? Do you think the show will be successful enough for NBC to reboot/extend additional series? Are there any original characters that you’d like to see appear in Reborn?